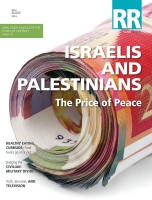 The cover story reports on a new RAND study that calculates the economic costs of the ongoing Israeli-Palestinian conflict. A second feature describes RAND's partnership with a dozen Los Angeles–area food trucks to test whether healthier menu options would sell. The issue also includes excerpts from a commencement speech delivered by RAND vice president Jack Riley at the University of Pennsylvania on criminal justice and national security. The Q&A features Krishna Kumar, who holds the distinguished chair in international economic policy at RAND, on how policy research and analysis can benefit the developing world. The POV column features Howard Gordon, the award-winning writer and producer of such television shows as 24 and Homeland (and newest member of the RAND Center for Middle East Public Policy Advisory Board), on the depiction of terrorism on TV. The Voices column features Paula Thornhill's recommendations on how to bridge the civilian-military divide. We also report on the formation of RANDNext, a new membership program to engage philanthropically minded early- to mid-career professionals.