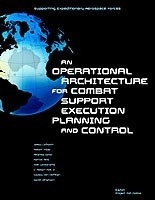 An Operational Architecture for Combat Support Execution Planning and Control

Note: Many electronic documents posted prior to 2003 are available as chapter PDFs or HTML files linked from the Contents.

As part of RAND’s work to define the elements of a combat support system to help achieve U.S. Air Force Aerospace Expeditionary Force goals, this report provides a critical analysis of the current command and control (C2) architecture for combat support (CS). Based on this analysis as well as interviews with Air Force personnel, lessons from the Air War Over Serbia, and doctrinal changes and evolving practices, the authors provide a series of structural concepts to help improve execution of the C2 for combat support and remedy identified shortfalls in the current structure. The proposed architecture would allow the combat support community to quickly estimate requirements for force package options and to assess the feasibility of operational and support plans. To transition to the new architecture, the authors recommend summarizing and clarifying Air Force CS doctrine and policy on C2, using feedback to monitor performance against plans, creating standing CS organizations to promote stability in turning from one contingency to the next, cross-training operations and combat support personnel on each other’s roles, and fielding improved information and decision support tools.

The research described in this report was performed under the auspices of RAND's Project AIR FORCE.