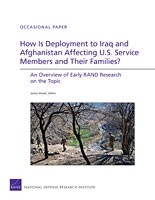 How Is Deployment to Iraq and Afghanistan Affecting U.S. Service Members and Their Families?

An Overview of Early RAND Research on the Topic

The conflicts in Iraq and Afghanistan, which have extended over the past decade, have put America’s all-volunteer force to its most severe test since its inception in 1973. In this environment of ongoing demand for battle-ready soldiers, sailors, airmen, and marines, there is concern about the effects and consequences of prolonged stress on the force as a whole and on individual service members and their families. The well-being of troops and the people close to them is an issue of much importance, both because it affects military readiness and the ability of the U.S. armed forces to carry out their mission and because the nation is committed to acting on its appreciation of the sacrifices made by military families. To devise policies effective for facilitating the well-being of this community, there must first be a comprehensive understanding of the myriad issues and consequences that service members and their families may face because of deployment. Yet for much of the 2000s, this understanding was largely lacking. Recognizing the need for analysis, RAND launched a program of research around 2005, its goal being to investigate this topic and, where possible, offer policymakers informed recommendations. This paper introduces this body of work—still being added to today—through summaries of six of RAND’s earliest studies on various aspects of the topic. It calls attention to the pressing policy questions; summarizes the key findings, insights into the issues, and policy implications; and, where applicable, lays out recommendations.

The research reported here was sponsored by the Office of the Secretary of Defense (OSD). The research was conducted jointly by the Center for Military Health Policy Research, a RAND Health program, and the Forces and Resources Policy Center, a RAND National Defense Research Institute (NDRI) program. NDRI is a federally funded research and development center sponsored by OSD, the Joint Staff, the Unified Combatant Commands, the Navy, the Marine Corps, the defense agencies, and the defense Intelligence Community.

This report is part of the RAND Corporation occasional paper series. RAND occasional papers may include an informed perspective on a timely policy issue, a discussion of new research methodologies, essays, a paper presented at a conference, or a summary of work in progress. All RAND occasional papers undergo rigorous peer review to help ensure that they meet high standards for research quality and objectivity.