This paper reviews data on the prevalence of sexual assault among servicemembers, predictors of disclosure, efforts to improve disclosure, victim needs and DoD efforts to provide necessary resources in the immediate aftermath of a sexual assault. The authors compared civilian and DoD guidelines for care and found them to be generally consistent. However, little is known about the fidelity with which DoD recommendations are implemented. 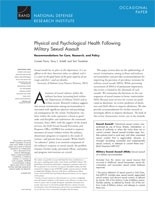 Awareness of military sexual assault — sexual assault of a servicemember — has been increasing within the Department of Defense (DoD). The DoD is striving to improve this situation, but unique conditions of life in the military may make response to these events more difficult than within the civilian sector. This paper reviews the prevalence of sexual assault among servicemembers, victim responses in the immediate aftermath of a sexual assault, barriers to disclosure, victim needs, and DoD efforts to provide necessary resources to victims. The authors review civilian guidelines for the care of physical injuries, response to STI/HIV and pregnancy risk, forensic services, advocacy and support services, and formal mental health care. They then review DoD directives, forms, and guidelines for sexual assault victim care, revealing that these generally are consistent with civilian guidelines. However, little is known about the fidelity with which these DoD recommendations are implemented. The authors close with recommendations for future research to support the DoD's commitment to a culture free of sexual assault, including a comprehensive, longitudinal epidemiological study of military sexual assault, a needs assessment of disclosed and undisclosed military victims, an evaluation of the training enterprise, and an evaluation to document the extent to which DoD directives requiring immediate, evidence-based care for military victims are being implemented with fidelity.

This research was conducted within the Forces and Resources Policy Center of the RAND National Defense Research Institute (NDRI), a federally funded research and development center sponsored by the Office of the Secretary of Defense, the Joint Staff, the Unified Combatant Commands, the Navy, the Marine Corps, the defense agencies, and the defense Intelligence Community.