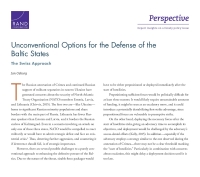 Unconventional Options for the Defense of the Baltic States

Russia's annexation of Crimea and continued support of Russian separatists in Ukraine have generated concerns about the security of NATO members Estonia, Latvia, and Lithuania. These countries border Russian territory and have sizable ethnic Russian populations. In case of attack on any of the Baltic states, NATO would be compelled to act or admit strategic defeat. Therefore, it is imperative to deter such aggression — and to counter it if deterrence should fail. This RAND perspective examines how key concepts and elements of the decentralized resistance approach that was part of Swiss military strategy during the Cold War could also benefit the defense of the Baltic states. This includes training and equipping independent local defense units, preparing transportation infrastructure for demolition to prevent an invasion, and instructing military forces and the public in how to effectively participate in resistance activities, alongside a coordinated information operations campaign. The perspective also discusses similarities and differences between the Swiss and Baltic contexts and proposes steps toward an unconventional strategy for Baltic defense.

This RAND-Initiated Research was provided by philanthropic contributions from RAND supporters and income from operations. This research was conducted within the International Security and Defense Policy Center of the RAND National Security Research Division (NSRD).