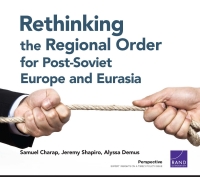 Rethinking the Regional Order for Post-Soviet Europe and Eurasia

Disputes over the regional order in post-Soviet Europe and Eurasia, which reached their apex with the Russian annexation of Crimea and invasion of eastern Ukraine, are at the core of the broader breakdown in Russia-West relations. The contest between Russia and the West over the states that found themselves "in between"—Ukraine, Belarus, Moldova, Georgia, Armenia, and Azerbaijan—has also taken a significant toll on these countries themselves. Current policy approaches to the regional order—particularly, the pursuit of mutually exclusive integration agendas by Russia and the West—seem likely to exacerbate these problems. This Perspective proposes a new approach to the regional order, based on mutual respect for the current membership of existing institutions, a mutually acceptable framework for regional integration for nonmembers of those institutions, and norms governing the behavior of outside powers toward these states. This proposal could bring regional stability, facilitate conflict resolution, restore economic links, and reduce the dangerous level of tensions in Russia-West relations. We suggest steps, including beginning an informal dialogue and making visible, reciprocal moves to demonstrate commitment, that governments can take in the short term to begin the process of achieving an agreement along these lines. Commonly encountered objections to pursuing such an agreement are also addressed. We present original polling data to address the question of the acceptability of a compromise to the citizens of the countries of the region.