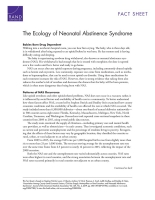 The Ecology of Neonatal Abstinence Syndrome

Walking into a newborn's hospital room, you can hear him crying. The baby, who is three days old, is in withdrawal after being exposed to an opioid before he was born. He has tremors and is having difficulty eating and sleeping.

The baby is experiencing newborn drug withdrawal, also known as neonatal abstinence syndrome (NAS). His withdrawal is bad enough that he is treated with morphine; the dose is tapered over a few weeks until he is better and ready to go home.

NAS can occur after any opioid exposure during pregnancy, including commonly abused opioids such as heroin and oxycontin. Less commonly, exposure can come from medications, such as methadone or buprenorphine, that can be used to treat opioid use disorder. Using these medications for such treatment increases the risk of NAS. However, there is strong evidence that taking them also reduces the mother's risk of overdose and decreases the chance that the baby will be born preterm, which is often more dangerous than being born with NAS.

Like opioid overdoses and other opioid-related problems, NAS does not occur in a vacuum; rather, it is influenced by social factors and availability of health care in a community. To better understand how those factors affect NAS, a team led by Stephen Patrick and Bradley Stein examined how county economic conditions and the availability of health care affected the rate at which NAS occurred. The study included more than 6,300,000 deliveries — about one-fourth of annual deliveries nationwide — in 580 counties across eight states: Florida, Kentucky, Massachusetts, Michigan, New York, North Carolina, Tennessee, and Washington. Researchers took repeated cross-sectional snapshots in these counties from 2009 to 2015, using several public data sources.

The study team examined the supply of clinicians — including primary care and mental health care providers, as well as obstetricians — in each county. They investigated economic conditions, such as current and persistent unemployment and the percentage of residents living in poverty. Recognizing that the effects of these factors may vary by geographic location, they classified the counties as rural, urban, or rural adjacent to an urban county.

From 2009 to 2015, the average NAS rate per 1,000 hospital births rose from slightly more than six to more than 25 per 1,000 births. The ten-year moving average for the unemployment rate rose over the same time frame from 6.5 percent to nearly 14 percent in 2015, reflecting the impact of the 2008 recession.

Understanding the Ecology of NAS

This study demonstrates how a county's context can affect NAS rates. The rate of babies born with NAS varied across the 580 counties examined, but the rates were often highest in the most rural counties. The study also links higher NAS rates with high long-term unemployment rates, highlighting the sustained influence of poor economic conditions, especially in rural areas.

One direct way to confront increasing NAS rates is to ensure that individuals most likely to misuse opioids have access to quality treatment for comorbid disorders, including mental health problems that, if untreated, make misuse and dependence more likely.

However, it is also critical to understand how economic conditions can heighten this public health threat. It is not yet clearly understood how economic conditions are linked to higher NAS rates. However, findings from this study suggest that U.S. Department of Agriculture (USDA) investments in rural community facilities could have broad benefits. The USDA Community Facilities Direct Loan and Grant Program helps rural small towns, cities, and communities make infrastructure improvements and provides essential facilities, such as schools, libraries, courthouses, public safety facilities, hospitals, colleges, and day care centers. This kind of social and economic support could potentially moderate some of the damaging effects of persistent unemployment.

An interactive tool based on study findings can help gauge the potential effectiveness of policies designed to reduce NAS. Federal, state, and local stakeholders can use the tool to explore how changing a county's economic conditions or the supply of mental health providers could affect the county's NAS rate.