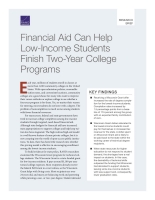 Each year, millions of students enroll in classes at more than 1,000 community colleges in the United States. With open admission policies, reasonable tuition rates, and convenient locations, community colleges are a good choice for many who want to improve their career outlooks or explore college to see whether a four-year program is for them. Yet, no matter their reason for entering, most students do not leave with a degree. The problem of noncompletion is much worse among students with fewer financial resources.

For many years, federal and state governments have tried to increase college completion among low-income students through targeted, need-based financial aid. Although state budgets for financial aid have increased, state appropriations to support colleges and help keep tuition low have stagnated. The high-tuition/high-aid model is a well-known feature of some private colleges, but it is now creeping into the world of open-access public institutions. To date, there has been little research into whether this pricing model is effective in encouraging enrollment among the lowest-income students.

To build evidence for state policy, RAND researchers examined the Wisconsin Grant program for technical college students. The Wisconsin Grant is a state-funded grant for low-income residents. It pays around $1,100 per year toward college expenses. Most recipients already receive the federal Pell Grant to cover tuition, so the Wisconsin Grant helps with living costs. Most recipients are over 24 years old, and many are balancing work and parenting while pursuing a one- or two-year degree. Student demand for technical degrees increased following the Great Recession and the slow economic recovery in the late 2000s and early 2010s. Jobs were scarce, and students sought to "upskill" to better compete in the labor market. At the same time, they were unknowingly competing with each other for financial support.

The state budgets enough for about 24,000 Wisconsin Grants each year, but often there are many more students applying for aid. Wisconsin Grant funds have always been allocated on a first-come, first-serve basis as students file the Free Application for Federal Student Aid (FAFSA) prior to the school year. Following the Great Recession, the funds ran out on an unpredictable date that varied from year to year.

This unfortunate situation set up a natural experiment to test the effects of the aid. Students who happened to just make the cutoff were no different on average from students who happened to just miss the cutoff, except that the ones who made the cutoff received Wisconsin Grant offers. Following up with both groups therefore gives researchers an estimate of the increased likelihood of college completion associated with receiving a Wisconsin Grant offer. That information could help decisionmakers evaluate whether the state was meeting its goals of increasing degree attainment for its lower-income residents.

Researchers at RAND Education and Labor collected data from the state of Wisconsin spanning five years of financial aid applications and following students for three years after they applied for aid. This study focused on students who applied for aid to attend one of the 16 technical colleges that make up the Wisconsin Technical College System (WTCS) and did so at any time during the 2010–2011 to 2014–2015 school years. The study sought to answer two questions:

Prior research on the first question suggests that aid is beneficial but public need-based aid sometimes fails to reach the students it is intended to help. Regarding the second question, identifying the students who most need aid is not a straightforward process. The federal government provides methods for measuring a family's ability to pay for college, but the federal government also gives large grants to families who are the least able to pay. Given the existence of federal aid programs, it is unclear whether the state should provide additional help to the poorest families or complement that aid with help to middle-income families. This study therefore investigated where Wisconsin Grants had their largest impact.

WTCS is focused primarily on vocational training, but it also awards liberal arts degrees and prepares students to transfer to universities. The system enrolls more than 300,000 students each year and offers more than 500 degree programs. These range from short-term technical diplomas and employer-linked training up to two-year associate's degrees.

Two-year degrees are valued in the Wisconsin workforce. Among full-time workers in 2016, those with technical degrees earned about $11,000 more per year than those who left college without a degree.

Rates of persistence and degree completion at WTCS colleges are relatively low, just as they are at many two-year public institutions. In this study, a quarter of students never enrolled after applying for aid. Of those who enrolled at all over the next three years, students were evenly split, with about equal numbers staying for one, two, or three school years. Overall, one in four students completed a degree in that time, and one in eight students transferred to a four-year college or university.

About the Student Aid and Enrollment Database

Wisconsin uses the FAFSA to gather student information and determine eligibility for financial aid. Students initially submit the form to the federal government, but if they list their home address in Wisconsin and apply to a WTCS college, then their information is automatically transmitted to the Wisconsin Higher Educational Aids Board (HEAB) and to WTCS. The student's household income, age, marital status, dependents, and year in college all combine to inform eligibility for federal, state, and institutional aid.

The FAFSA data, along with HEAB's records on Wisconsin Grant aid offers and awards, were linked to college attainment records from the National Student Clearinghouse. This database provided both a student's financial picture before entering college and their education outcomes at WTCS and other colleges. HEAB has operated the Wisconsin Grant for decades, but this is the first time their data have been used to track program alumni and study the outcomes of the program.

How the Wisconsin Grant Works

The Wisconsin Grant uses the expected family contribution (EFC) from the FAFSA to assess financial need. Most students who receive a Wisconsin Grant offer have an EFC value of zero, meaning that their families are not expected to have any financial resources for college. These students get the largest grants, and students with higher EFCs get slightly smaller grants. Grant offers are also limited by a few other factors, such as lifetime limits on eligibility.

Most important for this study, no student can receive an offer if they apply after funds are depleted. Figure 1 shows the stark drop in the proportion of FAFSA filers who received a Wisconsin Grant offer after the cutoff date when funds were depleted. The dots represent the proportion of students who got a Wisconsin Grant offer, among all students who filed the FAFSA on a particular day relative to the cutoff date, broken into three EFC groups. The dot sizes are proportional to the number of FAFSA filers on that day and in that EFC group. The sharp drop in eligibility is clear for the zero-EFC group (darker blue) and for the middle-EFC group (lighter blue), but there is no drop for the high-EFC group (orange), who are always ineligible for need-based aid offers.

Receiving a Wisconsin Grant offer increased the rate of degree completion for the lowest-income students. Completion rates increased by 1.5 percentage points from a baseline of 17.5 percent among the group with a zero EFC. This increase across the cutoff is shown in Figure 2. The dots represent the proportion of students filing on a particular day who went on to earn degrees within three years. For the zero-EFC group (darker blue), the average rate of degree completion is higher on the left-hand (early) side, among earlier applicants, than on the right-hand (too late) side, where no grant funding was available.

For continuing students who were closer to degree completion at the time of applying for aid, the effects were larger, moving completion up by 2.6 percentage points from a baseline of 29.3 percent among the lowest-income students.

The grant did not show evidence of increasing initial enrollment among financial aid applicants. Taken together, these results imply that the aid they received helped enrolled students meet costs and supported graduation, but lowering the net price through an aid offer was not a factor in students' decisions to enroll in college in the first place. The uncertainty inherent in the first-come, first-serve process potentially hinders the grant's ability to factor into decisionmaking.

Wisconsin Grant dollars allocated to the lowest-income students could pay for themselves in increased tax revenue for the state. The study results suggest that a dollar spent on Wisconsin Grant aid is likely to be paid back to the state within the working career of technical degree recipients. This estimate focuses on the increment in wage earnings from the additional degrees that the Wisconsin Grant generates among the lowest-income students. They received larger grants per person, but the positive effects on graduation were consistently higher.

Traditional, publicly funded grant aid can have a positive effect on the lowest-income students attending two-year colleges. This impact was hidden in previous studies that found muted effects at two-year colleges. Those studies used smaller samples to draw less-precise conclusions, or they estimated broader averages without disaggregating by income.

Marginal increases to federal and state aid for the poorest students could raise graduation rates under the current FAFSA-based structure. Longer-term changes will depend on how higher education affordability, student support, and FAFSA simplification develop in the coming years.

When state resources for higher education do not respond to student demand, the shortages have a real impact on students. In this case, the desirability of technical skills outpaced the funding that Wisconsin had allocated to support students, leaving some low-income students with less support and, consequently, lower graduation rates.

Even when tuition is paid, students benefit from help with living expenses. Most Wisconsin Grant recipients paid no tuition after the federal Pell Grant was applied. Still, helping students with other expenses through state financial aid had a measurable positive impact.