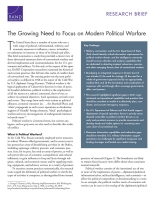 The Growing Need to Focus on Modern Political Warfare

The United States faces a number of actors who use a wide range of political, informational, military, and economic measures to influence, coerce, intimidate, or undermine its interests or those of its friends and allies. This brief summarizes a study that provided a clearer view of these adversarial measures short of conventional warfare and derived implications and recommendations for the U.S. government and military. To this end, at the request of the sponsor, RAND Corporation researchers examined the historical and current practices that fall into this realm of conflict short of conventional war. The starting point was the term political warfare, as defined in 1948 at the outset of the Cold War by U.S. diplomat George Kennan: "Political warfare is the logical application of Clausewitz's doctrine in time of peace. In broadest definition, political warfare is the employment of all the means at a nation's command, short of war, to achieve its national objectives. Such operations are both overt and covert. They range from such overt actions as political alliances, economic measures (as . . . the Marshall Plan), and 'white' propaganda to such covert operations as clandestine support of 'friendly' foreign elements, 'black' psychological warfare and even encouragement of underground resistance in hostile states."[1]

Political warfare is a historical term, but current analogues, such as gray zone, are also used to describe this realm of conflict.

What Is Political Warfare?

In the Cold War, Russia routinely employed active measures to subvert Western-allied governments, and in recent years it has pursued an array of destabilizing activities in the Baltics, including espionage, military pressure, and economic pressure. Iran, for its part, has used an array of proxies, as well as soft power (the use of economic, sociopolitical, and cultural influence), to gain influence in Iraq and Syria through religious, cultural, and economic means and by supplying training, equipment, and advisory services to a variety of partners.

To examine current practices systematically, the research team scoped the definition of political warfare to clarify the types of activities it comprises, as distinguished from normal practices of statecraft (Figure 1). The boundaries are likely to remain fuzzy because views differ about what constitutes normal statecraft.

Political warfare consists of the intentional use of one or more of the implements of power — diplomatic/political, information/cyber, military/intelligence, and economic — to affect the political composition or decisionmaking in a state. As an example, the political warfare tactic of economic subversion can be seen in the overlap of the diplomatic/political (routine diplomacy) and economic (trade) spheres. Political warfare is often — but not necessarily — carried out covertly, but it must be undertaken outside the context of conventional war.

What Are the Characteristics of Modern Political Warfare?

Researchers focused on three case studies — two state actors (Russia and Iran) and one nonstate actor (the Islamic State of Iraq and the Levant [ISIL]) — to derive the common characteristics of modern political warfare (Table 1). Each country employs its particular advantages or strong suits to gain leverage. In Estonia, Russia capitalized on the sentiments of its Russian minority to fan protests over the decision by the Estonian government to move a Soviet monument — the Bronze Soldier incident — which escalated into protests, a sustained cyberattack, and then sanctions and threats. In subsequent years, the Russian government has maintained its hostile stance to destabilize Estonia and other Baltic states, including contesting the legitimacy of their independence from the former Soviet Union.

In terms of Iran, Tehran has engaged in political warfare in Syria as part of its efforts to extend its influence in the region and ensure the survival of a pro-Iranian government in Damascus. To buttress its position, Iran has attempted to indoctrinate the National Defense Force militias with Islamic revolutionary ideology, appealed to foreign Shi'a fighters' desire to protect Syria's holy shrines, taken advantage of Syria's economic dependency to increase Tehran's influence over the Damascus government, and engaged in public diplomacy to endear Syrians to the Islamic Republic. Iranian-backed Iraqi militias have sent fighters to Syria under the supervision of Iranian Quds Force advisers.

Synthesizing the case study characteristics in the table yielded a list of key attributes that broadly describe how this form of warfare is conducted today. Political warfare

Where Are the Gaps in U.S. Information Capabilities and Practices?

One of the key attributes of modern political warfare that emerges from the synthesis is the importance of the information space and the ability to operate effectively within that space. Because this area can profoundly affect all other lines of effort, it must be considered and managed at the highest levels of government. Moreover, the revolution in communications and information technology has transformed the information space, thus requiring new models and new capabilities to compete effectively in this arena.

What Are Effective Measures to Confront Political Warfare?

Developing an integrated response to threats short of war includes (1) the need for strategy, (2) the need for a whole-of-government approach to statecraft led by an appropriately enabled DoS, and (3) the formulation and coordination of responses with and through other sovereign governments, allies, and partners. The authors also include recommendations for improving military contributions to such an integrated approach.

In terms of the need for strategy, the general requirement for a cost-effective approach to national defense suggests that early and effective nonmilitary responses — and nonlethal uses of the military element of national power — may provide the United States with valuable tools to deter adversaries, prevent conflicts from escalating, or mitigate their effects. In some cases, these approaches may effectively reduce or remove the incipient threats.

As for the need for a whole-of-government approach, DoS is the designated lead for conducting U.S. foreign policy and represents such foreign policy interests abroad. Thus, it is the logical entity to lead a whole-of-government response in this primarily political and diplomatic realm and to coordinate other agencies if given such policy guidance from the President. However, despite the deep country and regional expertise at DoS, this research highlighted significant gaps in organizational and operational capabilities and practices that should be remedied to enable DoS to effectively plan, coordinate, and execute interagency responses continuously, if so directed by the President.

U.S. plans and activities must necessarily be coordinated with the governments of those countries where the aggression, subversion, coercion, or destabilization is occurring, along with other partners or allies who are willing and able to contribute their resources and efforts in a common effort.

Eight recommendations are relevant to improving the practices and capabilities of the U.S. military — and special operations forces (SOF) in particular — to work with state and nonmilitary entities to combat nonconventional warfare through expanded deterrence, enhanced resilience, and preparations for national resistance, among other means.