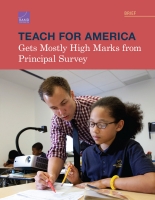 Teach for America Gets Mostly High Marks from Principal Survey 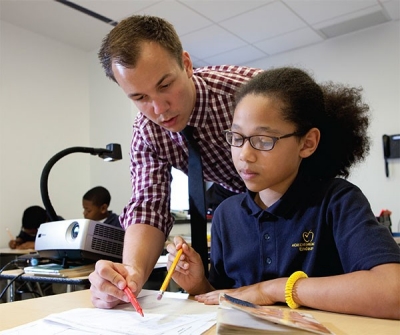 Photo by JC Bourcart/Teach For America

Across the country, school districts serving socioeconomically disadvantaged children — particularly those in small towns and urban areas — lack access to high-quality teachers. Seeking to eliminate this inequity, Teach For America (TFA) recruits and develops recent college graduates and professionals to serve as corps members who commit to teach for two years in low-income inner-city and rural schools. TFA has a highly competitive acceptance policy, and, although program entrants are not required to be certified teachers, unlicensed or uncertified corps members receive alternative certification through coursework taken while completing the program. Corps members whom schools hire are full-fledged faculty members. From its initial cohort of 500 teachers in 1990, TFA has grown significantly: In the 2013–2014 school year, approximately 11,000 active corps members taught in some of America's neediest schools.

To Better Prepare Corps Members, Teach For America Seeks to Understand How Principals View Them 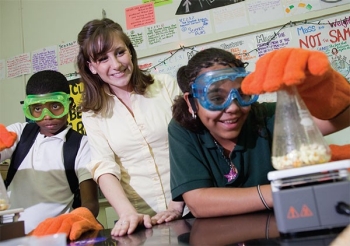 Photo by JC Bourcart/Teach For America

TFA seeks to improve the preparation, placement, and performance of its teachers. Every two years since 1997, it has surveyed principals to help meet these goals. In the fall of 2014, TFA asked the RAND Corporation to review, revise, and administer its 2015 National Principal Survey, a survey of school leaders who employed TFA corps members during the 2014–2015 school year. RAND researchers fielded the online survey to 3,338 principals between January and April 2015 and received 1,803 responses, or a 54-percent response rate.

Principals who responded to TFA's 2015 survey generally had fewer years of teaching and principal experience than respondents of the 2012 national Schools and Staffing Survey. Nearly half had three or fewer years of experience as principals. In addition, principals from charter schools were overrepresented. Although the majority of respondents work in traditional schools, 27 percent were charter school principals; charter schools made up only 6.2 percent of schools in the nation in 2012–2013. It should be noted that a majority of principals reported that they had three or fewer corps members at their schools. 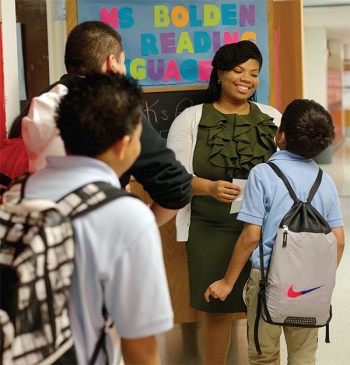 Photo by Sally Ryan/Teach For America

A sizable majority of respondents indicated being satisfied with the TFA corps members in their school, consistent with findings from two years ago; however, the rate of principals not reporting overall satisfaction rose to 20 percent, up significantly from the 6 percent reporting similarly two years ago. Overall satisfaction might reflect the positive difference that principals report TFA corps members making in such areas as academic achievement, school culture and faculty collaboration, classroom culture, socioemotional development, and relationships with parents.

Respondents also rated corps members generally high on specific skills (Figure 1). In fact, most principals responded that TFA corps members' abilities were either equal to or more proficient than those of other novice teachers. 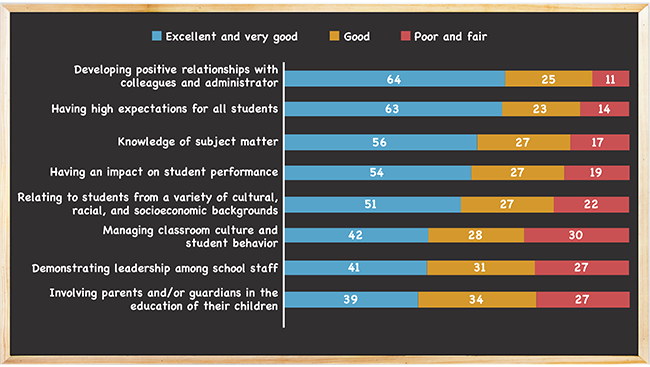 Conversely, respondents indicated that corps members' participation in school activities was generally low (Figure 2). However, in this area as well, principals' perceptions of corps members were comparable to their perceptions of other novice teachers. 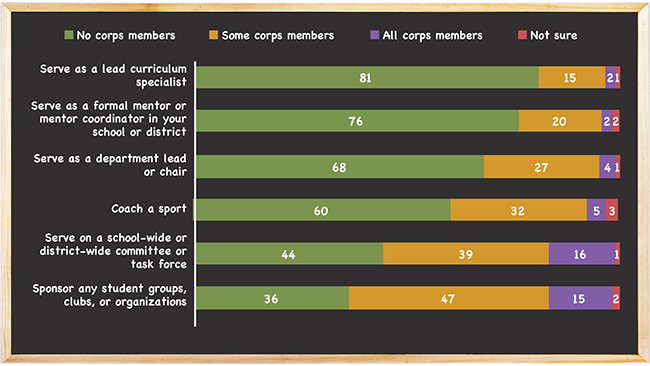 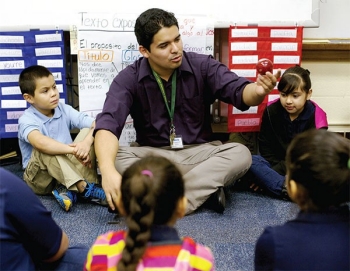 Photo by Sally Ryan/Teach For America

Most Principals Would Hire Corps Members in the Future

Figure 3. Reasons principals would or would not hire corps members 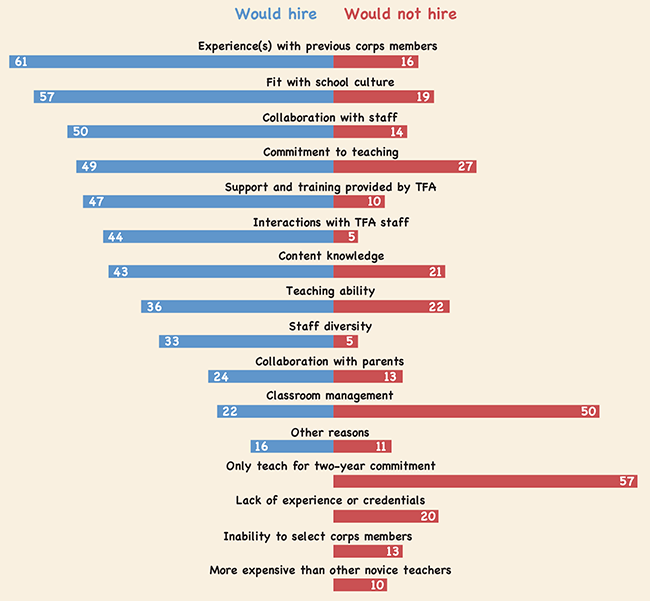 As noted in Figure 3, many principals indicated that experience with previous corps members would positively influence their decision to hire corps members in the future. And, in fact, a large majority of principals working with TFA alumni agreed that these teachers promote school culture and school community and demonstrate leadership.

Conclusion: Principals Find That Teach For America Is Making Positive Contributions to Schools and Learning and Note Areas for Improvement 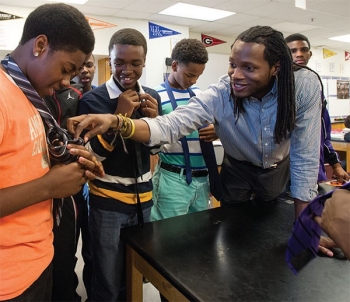 Photo by Mike Carroll/Teach For America

The results of the 2015 survey provide useful information for TFA to understand how principals perceive TFA corps members working in their schools and to take action as needed to address concerns. For example, although principals generally rated corps members highly in regard to having high expectations for all students and developing relationships with colleagues, they tended to have more-neutral ratings in terms of classroom management and developing relationships with parents.

Additional research might also be useful to explore why charter school principals and principals who were more familiar with TFA (i.e., TFA alumni, principals with TFA alumni working at their schools, more years of experience working with corps members) tended to rate corps members' abilities and the support TFA offered significantly lower than principals not in those groups.