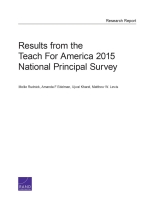 Results from the Teach For America 2015 National Principal Survey

Teach For America's (TFA's) mission is to build the movement to eliminate educational inequity by developing leaders for U.S. schools who are committed to providing to low-income children the same access to a great education that their wealthier peers have. The 2015 National Principal Survey is the tenth in a series to provide answers regarding how TFA is doing in providing high-quality, appropriately prepared corps members to schools in an effort to support and improve progress toward this mission. The results of this survey show the context and conditions in which corps members are working, how principals perceive corps members, and how principals perceive their interactions with TFA. These findings offer insights that TFA staff can consider as they try to provide more-tailored supports to corps members, inform professional development to meet the needs of corps members and the schools they staff, and continue to build relationships with the principals of schools in which corps members serve.

Respondents Were Willing to Hire or Recommend Hiring Corps Members

Principals Reported Positive Feelings About Alumni Working in Their Schools

The research described in this report was sponsored by Teach For America (TFA) and conducted by RAND Education, a division of the RAND Corporation.