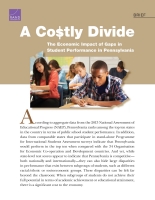 The Economic Impact of Gaps in Student Performance in Pennsylvania 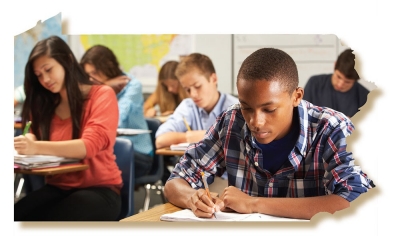 According to aggregate data from the 2013 National Assessment of Educational Progress (NAEP), Pennsylvania ranks among the top ten states in the country in terms of public school student performance. In addition, data from comparable states that participate in stand-alone Programme for International Students Assessment surveys indicate that Pennsylvania would perform in the top ten when compared with the 34 Organisation for Economic Co-operation and Development countries. And yet, while state-level test scores appear to indicate that Pennsylvania is competitive — both nationally and internationally — they can also hide large disparities in performance that exist between subgroups of students, such as different racial/ethnic or socioeconomic groups. These disparities can be felt far beyond the classroom: When subgroups of students do not achieve their full potential in terms of academic achievement or educational attainment, there is a significant cost to the economy.

To understand both past and future consequences for Pennsylvanians, a RAND researcher documented the magnitude of the gaps in education performance for public school students in Pennsylvania. Using these estimates of student achievement test scores and educational attainment as measures of human capital in the labor market, the researcher then modeled the economic consequences in terms of individuals' annual earnings or Pennsylvania economic output and projected the return on closing various achievement or attainment gaps. The study, which is based on two sources of data on student achievement — math and reading scores from the Pennsylvania System of School Assessment (PSSA) and the NAEP — as well as graduation rates, is believed to be the first of its kind at the state level.

Although Pennsylvania ranks relatively high among U.S. states in average student performance, gaps in test scores and graduation rates based on student race-ethnicity and socioeconomic status are among the widest nationally. African-American and Latino students — who account for one in four eighth-grade public school students in Pennsylvania — are behind their white counterparts in reading and math proficiency by as much as 24 to 38 percentage points on average (see Figure 1).

Students from economically disadvantaged families make up an even larger portion of the assessed student population — 40 percent of all eighth-grade public school students. These students are behind in reading and math proficiency by 20 to 26 percentage points on average compared with students who are not economically disadvantaged (see Figure 2). The proficiency gaps are equally large when comparing students whose parents have a college degree versus those whose parents have less than a high school education.

The study's author took several approaches to estimate the economic impact of academic performance gaps in Pennsylvania. The first approach, which was based on the estimated relationship between student achievement and subsequent earnings, calculated the lost earnings for African-American and Latino workers in Pennsylvania implied by race-ethnic achievement gaps. Based on this method, race-ethnic academic achievement gaps amount to an estimated annual cost of $1 billion to $3 billion in lost earnings, which represents 6 to 15 percent of African- American and Latino workers' earnings. The range of this estimate reflects the uncertainty in the measure linking test scores to earnings, as well as the range of estimates for the size of the achievement gap by race-ethnicity, depending on which data source (PSSA or NAEP) and which assessment (reading or math) are used.

For another perspective on the current cost of achievement gaps, the author modeled a hypothetical world in which achievement gaps were closed as of 2003. She then traced the effect on Pennsylvania GDP over time for ten years (until 2013) based on the estimated relationship between achievement scores (or labor force skill levels) and GDP growth, using economic models that posit that higher levels of human capital lead to a higher rate of innovation and higher growth over time. If race-ethnic academic achievement gaps had been closed in 2003, the base year in the modeling exercise, Pennsylvania GDP would have been higher one year later by $1 billion to $2 billion (0.2 to 0.4 percent of actual GDP in 2004). Ten years later, with the compounded effect on economic growth, GDP in 2013 would have been $12 billion to $27 billion higher — a gain of 2 to 4 percent over actual 2013 GDP (Figure 4). Alternatively, if gaps due to family economic status had been closed in 2003, the author projected that GDP ten years later would have been approximately $22 billion to $44 billion higher — a gain of 3 to 7 percent (Figure 5).

On the flip side of this analysis of the historical costs of Pennsylvania's achievement gap, the RAND researcher projected the gains to future cohorts of labor market entrants that would be realized if student performance gaps based on race-ethnicity or family economic status were closed. Closing race-ethnic achievement gaps going forward would increase the lifetime earnings of each yearly group of Pennsylvania students by $1 billion to $3 billion (in present-value dollars). Accounting for the broader social gains from higher educational attainment (such as lower rates of crime and welfare), as well as the private gains from increased earnings and fringe benefits, produces an estimated total benefit of $3 billion to $5 billion for each annual cohort when gaps by race-ethnicity or socioeconomic status are closed.

Policymakers Should Consider the Return on Investment for Programs Intended to Close Achievement Gaps, Especially Those Aimed at Economically Disadvantaged Students

When school performance gaps are closed, individuals can benefit from higher lifetime earnings, communities can gain from reduced social costs, and state economies can experience higher rates of economic growth.

Given the substantial economic costs for existing student performance gaps — and the potential gains to be realized from improving low-performing students' outcomes — what policies or interventions can policymakers consider to help narrow or eliminate the measured gaps? Evidence- based policies to consider include

Policy and program options that can demonstrate improvements in academic achievement and educational attainment could be used in conjunction with these economic estimates to provide a useful cost-benefit analysis, thereby bringing economic evidence to bear on decisionmaking regarding education-related investments in children and youth.

While the scope of this study reflects economic modeling of the student performance gaps specific to Pennsylvania, the lessons learned may be relevant for any state confronting the economic consequences of education achievement or attainment gaps. These estimates demonstrate that when school performance gaps are closed, individuals can benefit from higher lifetime earnings, communities can gain from reduced social costs, and state economies can experience higher rates of economic growth.