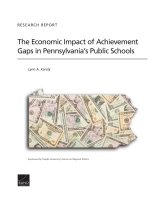 The Economic Impact of Achievement Gaps in Pennsylvania's Public Schools

This study documents the magnitude of the gaps in student performance for public school students in Pennsylvania and estimates the economic consequences of those education performance gaps. Although Pennsylvania is one of the top-scoring states on the 2013 National Assessment of Educational Progress (NAEP) on average, the achievement gaps between students classified by race-ethnicity, economic status, and parent education are among the largest in the country. For eighth-grade reading and math, the share of white students in Pennsylvania achieving proficiency or above exceeds the share for African-American and Latino students by as much as 24 to 38 percentage points, depending on the assessment and subject. There are equally large differences in student achievement based on family economic status and parent education, as well as sizeable gaps in performance across school districts. If race-ethnic or socioeconomic achievement gaps were eliminated, average achievement scores for Pennsylvania would match Massachusetts' result (the top-scoring state on the NAEP) and likely place the state among the top-scoring countries internationally. The study applies several methods to value the cost of existing gaps in terms of current economic performance and to value the benefits that would accrue in the future from closing current gaps. Notably, race-ethnic academic achievement gaps amount to an estimated annual cost of $1 billion to $3 billion in lost earnings, which equates to 6 to 15 percent of the earnings for African-American and Latino workers. If student performance gaps based on race-ethnicity or family economic status were closed for future cohorts, each annual cohort in Pennsylvania would gain $3 billion to $5 billion in present-value lifetime compensation and nonmarket benefits. These social gains from closing race-ethnic gaps equate to approximately $83,000 to $125,000 in present-value dollars per African-American and Latino student.

This research was sponsored by Temple University's Center on Regional Politics and conducted in RAND Education.