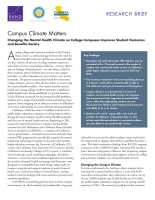 Among college and university students in the United States, there is a substantial gap between the need for mental health treatment and the use of mental health services. Almost 20 percent of college students experience some form of serious psychological distress — anxiety, depression, or feelings of hopelessness — yet only about a third of these students, many of whom have access to on-campus providers, as well as insurance to cover services, ever receive treatment. The picture is particularly bleak for community college students, who are often the least likely to receive help for a mental health problem. This unmet need for mental health care among college students represents a significant public health issue. Young adulthood is a pivotal moment in life: Without treatment for their mental health problems, students face a range of potentially serious and lasting consequences, from dropping out to substance misuse to difficulties with social relationships to a lower lifetime earning potential.

California, which has some 2.8 million students on its public higher education campuses, is taking steps to reduce the gap between students' need for mental health treatment and their use of mental health services. Beginning in 2011, as part of a statewide initiative to improve mental health outcomes for all Californians, the California Mental Health Services Authority (CalMHSA) — a coalition of California county governments — invested in prevention and early intervention (PEI) programs that specifically targeted the mental health and well-being of students in the state's three public higher education systems: the University of California (UC) system, the California State University (CSU) system, and the California Community Colleges (CCC) system. A combination of trainings, social marketing campaigns, and online resources — versus the more traditional approach of increasing the number of mental health screenings and clinicians — was designed to accomplish three main things: help people on campus recognize and support students in need of mental health care, combat the stigma of mental illness, and give students tools for dealing with stress and other personal and emotional problems.

CalMHSA's overarching goal has been to foster campus environments in which students feel comfortable using mental health services, and in which students' peers and faculty are empowered to support them before a problem becomes a crisis. This brief summarizes findings from RAND's ongoing evaluation of the CalMHSA higher education PEI initiative, and it discusses the positive influence that improving campus environments and reducing stigma appears to have on college and university students' use of mental health services.

To better understand why (and how often) students fail to seek help for a mental health problem, a team of RAND researchers analyzed data they collected in an online survey of over 33,000 students and 14,000 faculty on 39 California public higher education campuses in the spring and fall semesters of 2013. The researchers paid particular attention to factors that are amenable to change, such as the presence of on-campus mental health clinics, students' coping skills, and campus attitudes toward mental health issues. About 20 percent of the students reported current mental health issues — this rate is consistent with other studies — and 11 percent said that their academic work had suffered significantly in the past year as a result of a mental health problem. Yet only about one-fifth of the students with current mental health issues sought treatment. Not surprisingly, the availability of on-campus mental health services played a significant role: UC and CSU students, who have access to a systemwide network of on-campus mental health providers, were much more likely to seek treatment than their peers in the CCC system, who often only have access to off-campus providers. But even on campuses with formal networks of mental health clinics, a significant number of students chose to seek services off campus. This may be due to prior relationships with off-campus providers or other factors that the survey did not measure.

If every California public college student with a current mental health problem or recent mental health–related academic impairment were to study on a campus with a culture supportive of mental wellness, the chances of that student getting the services he or she needs would rise by an average of almost 40 percent.

Students with a repertoire of active coping skills — working out problems by talking or writing about them, or seeking alternate solutions to a personal problem — were also among the most likely to use mental health services. The importance of coping skills was especially noticeable among students who reported that their academic work had suffered in the past year as a result of current serious psychological distress: Those with active coping skills were almost 50 percent more likely to seek services than those with low coping skills.

But one of the most important factors in terms of a student's decision to seek mental health services was campus climate. Students who felt that their campus was a place where they were less likely to be stigmatized for admitting to a mental health problem — who felt that their campus community would support them in seeking treatment — were over 20 percent more likely to receive services, and 60 percent more likely to do so on campus. And it was not just the students' perception of campus climate that was important: On campuses where the faculty and staff felt that they had adequate resources and services to support students with mental health problems, there was significantly higher use of mental health services by students, both on and off campus. These findings suggest that investing in ways to change how we think and talk about mental health issues on our college campuses is an important aspect of addressing the unmet mental health needs of college students. Indeed, researchers estimate that if every California public college student with a current mental health problem or recent mental health–related academic impairment were to study on a campus with a culture supportive of mental wellness, the chances of that student getting the services he or she needs would rise by an average of almost 40 percent.

Payback to the State

Data collected from a second wave of the survey during the spring and fall semesters of 2014 enabled the RAND team to analyze the impact of CalMHSA's PEI programs on students' use of mental health services and then to estimate the potential economic benefits of CalMHSA's investment in these programs. The results in both cases were encouraging.

From academic year 2013 to academic year 2014, the number of students receiving mental health services increased by 13.2 percent. Among students who reported that their academic work had suffered as a result of current serious psychological distress — the group with the highest rates of use in the first wave of the survey — there was an increase in use of nearly 16 percent. And among community college students — the group with the lowest rates of service use in the first wave — there was an overall increase of 15 percent, and over 26 percent for those with mental health–related academic impairment. Based on these findings and a prior study that linked improved mental health to higher graduation rates, the researchers estimate that an additional 329 students will graduate each year because of increased use of mental health services, almost a third of them from community colleges.

But more students graduating is not the final payoff from CalMHSA's efforts to reduce unmet need for mental health services on college campuses: Taking into consideration the costs of CalMHSA's PEI programs, the costs of increased treatment associated with the programs, and the expected increase in lifetime earnings from higher rates of graduation, the researchers estimate a net societal benefit to California of as much as $56 million through an increase in wages, of which the state government alone will receive a benefit of $8.5 million through an increase in tax revenue. So, for each dollar invested by CalMHSA in mental health initiatives for college and university students, $6.49 would return to society and $0.98 to the state government. And, again, for community college students, the findings were especially significant: Even a small change in the number of community college graduates could yield a positive return, with an estimated $11.39 returning to society for each dollar invested on their campuses.

For each dollar invested by CalMHSA in mental health initiatives for college and university students, $6.49 would return to society.

Conclusion and Next Steps

RAND's evaluation of the CalMHSA statewide PEI initiative presents strong evidence that expanding the conversation on college campuses from "How many more clinicians do we need?" to "How can we reduce stigma and educate and empower students, faculty, and staff to support students struggling with mental health issues?" can lead to significant benefits, both short- and long-term: When college students receive the mental health treatment they need, thereby reducing their suffering, they are more likely to graduate and go on to lead productive lives, an outcome that is better both for them as individuals and for society as a whole. While it appears that CalMHSA's initiative to improve the campus climate succeeded in its goal of increasing the use of mental health services, going forward, further research is needed to better understand the relative impact of specific PEI activities — for instance, the benefit of in-person or online trainings versus social media campaigns — on reducing stigma and facilitating access to effective resources and treatment for students.

Given the lack of a formal network of mental health clinics in the CCC system, and the fact that a significant number of UC and CSU students choose to seek services off campus rather than on campus, it will also be important to develop solid collaborative relationships between higher education institutions and community-based organizations, such as county departments of mental health. Enhancing ties to community mental health resources, and thus broadening the range of off-campus mental health treatment options, can benefit students in all three of California's public higher education systems.

The California Mental Health Services Authority (CalMHSA) is an organization of county governments working to improve mental health outcomes for individuals, families, and communities. Prevention and early intervention programs implemented by CalMHSA are funded by counties through the voter-approved Mental Health Services Act (Prop. 63). Prop. 63 provides the funding and framework needed to expand mental health services to previously underserved populations and all of California's diverse communities.