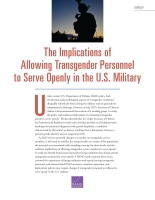 The Implications of Allowing Transgender Personnel to Serve Openly in the U.S. Military 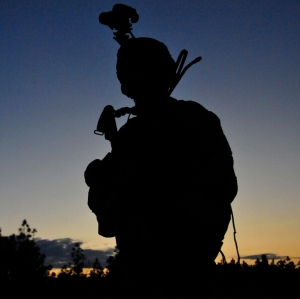 Under recent U.S. Department of Defense (DoD) policy, both the physical and psychological aspects of "transgender conditions" disqualified individuals from joining the military and were grounds for administrative discharge. However, in July 2015, Secretary of Defense Ashton Carter announced the creation of a working group "to study the policy and readiness implications of welcoming transgender persons to serve openly." He also directed that the Under Secretary of Defense for Personnel and Readiness would make the final decision on all administrative discharges for personnel diagnosed with gender dysphoria, a condition characterized by discomfort or distress resulting from a discrepancy between a person's gender identity and sex assigned at birth. 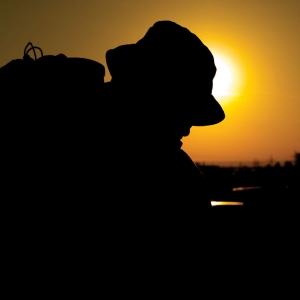 What are the unique health care needs of the transgender population?

Transgender is an umbrella term referring to individuals who identify with a gender different from the sex they were assigned at birth. It is important to note that transgender status alone does not constitute a medical condition. Under current guidelines in the Diagnostic and Statistical Manual of Mental Disorders, fifth edition (DSM-5), those who experience significant distress related to their transgender status may have a medical condition called gender dysphoria and may require some combination of psychosocial, pharmacologic, or surgical care. Treatment may begin after psychotherapy to confirm a diagnosis of gender dysphoria, and any treatment decisions are made in collaboration with medical specialists.

A subset of transgender individuals may choose to transition and to live and work as a gender different from that assigned at birth. For some, the transition may be primarily social, with no accompanying medical treatment. For others, medical treatments, such as hormone therapy and hair removal, are important steps to align their physical body with their target gender. A subset of those who medically transition may choose to undergo surgery to make their body as congruent as possible with their gender identity. This process of surgical transition is also often referred to as sex or gender reassignment or gender confirmation.

How many transgender personnel serve in the U.S. military?

It is important to note that there have been no rigorous epidemiological studies of the size or health care needs of the U.S. transgender population, including those who serve in the U.S. military. Most existing data are from surveys of selected populations, making it difficult to extract accurate estimates. To help overcome this limitation, the RAND study used data from previous research to determine how many transgender personnel may be serving in the U.S. military. Applying these prevalence estimates to fiscal year (FY) 2014 military personnel numbers, the study estimated that there are between 1,320 and 6,630 transgender personnel serving in the active component (accounting for 0.1–0.5 percent of the active component), and between 830 and 4,160 in the Selected Reserve (accounting for 0.1–0.5 percent of the Selected Reserve). Combining survey evidence from multiple states and adjusting for the male/female distribution in the military provided midrange estimates of 2,450 transgender personnel in the active component and 1,510 in the Selected Reserve.

How many are likely to seek gender transition–related medical treatment, and what are the costs of covering this treatment? 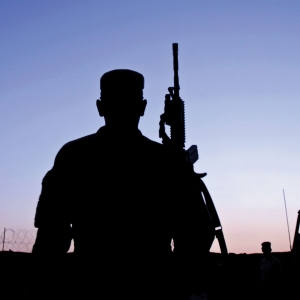 Again, not all transgender individuals choose to medically transition or opt for all types of available treatments. A lack of empirical research also makes it challenging to estimate the number of personnel who would seek gender transition–related treatment. The RAND study applied two distinct methods that produced similar (but not identical) results. First, analyzing private health insurance data on actual utilization rates in the civilian population, the study estimated that only 29–129 service members in the active component would seek any type of gender transition–related care in a given year. Second, applying a prevalence-based approach using estimates from self-reported data from the National Transgender Discrimination Survey, the study estimated that between 30 and 140 personnel would seek hormone therapy, and 25–130 personnel would seek surgical treatment.

Using private health insurance data on transition–related treatment costs, the study found that Military Health System costs would increase by between $2.4 million and $8.4 million per year if it were to extend this care to transgender personnel. This amount represents an exceedingly small proportion of active-component health care expenditures (0.038–0.134 percent of approximately $6 billion in spending in FY 2014) and overall DoD health care expenditures (0.005–0.017 percent of $49.3 billion in actual expenditures for the FY 2014 Unified Medical Program).

What are the potential readiness implications of allowing transgender personnel to serve openly?

The effect on force readiness is an important consideration in any military policy change. Many types of medical treatments can lead to lost labor and leave personnel temporarily unable to deploy. Given the small estimated number of transgender personnel and the even smaller number who would seek gender transition–related treatment in a given year, the study found that the readiness impact of transition–related treatment would lead to a loss of less than 0.0015 percent of total available labor-years in the active component. Even using the highest estimates, less than 0.1 percent of the force would seek gender transition–reasons — a number amounting to around 14 percent of the active component.

The experiences of foreign militaries offer potential insights for U.S. policymakers if a decision is made to allow transgender personnel to serve openly in the U.S. military:

Ensure strong leadership support and identify and communicate the benefits of an inclusive and diverse workforce to successfully implement a policy change and integrate openly serving transgender personnel into the force.

Develop an explicit written policy on all aspects of the gender transition process.

Provide education and training on transgender personnel policy to the entire force, and integrate this training with other diversity-related training and education.

Develop and enforce a clear anti-harassment policy that addresses harassment aimed at transgender personnel alongside other forms of harassment.

What can the U.S. military learn from other countries that permit transgender personnel to serve openly? 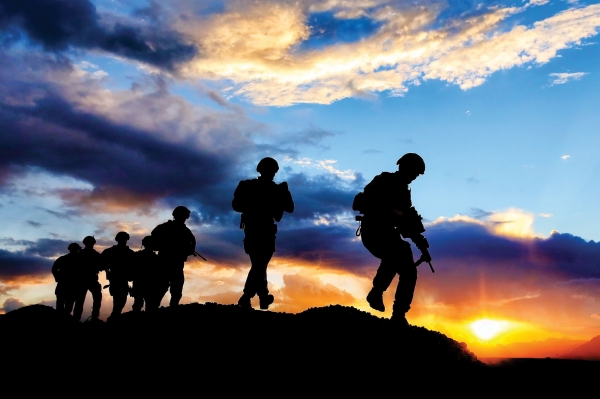 Which policies would need to be changed to allow transgender personnel to serve openly?

If transgender personnel are allowed to serve openly in the U.S. military, it will be important to assess whether any changes would need to be made to policies. The RAND study reviewed 36 accession, retention, separation, and deployment regulations across the services and the Office of the Secretary of Defense that may require changes if DoD allows transgender personnel to serve openly. The study found that language pertaining to transgender individuals in accession instructions does not match that used in the DSM-5. This results in restrictions in DoD policy that do not match current medical understanding of gender identity.

The following recommendations should inform a review of the policies that may be affected by a decision to allow transgender personnel to serve openly:

Accession policies. DoD should review and revise the language in accession instructions to match the DSM-5 for conditions related to mental fitness. Physical fitness standards should specify physical requirements (rather than physical conditions) and should clarify when the service member's target gender requirements will begin to apply.

Retention policies. DoD should clarify retention standards during and after medical transition. For example, policies should detail whether and when personnel may need to be held temporarily exempt from physical fitness testing and requirements during gender transition.

Separation policies. DoD may want to revise the current separation process based on lessons learned from the repeal of Don't Ask, Don't Tell. When discharge decisions occur outside the standard medical and physical review process, this limits documentation and opportunities for review. DoD should also develop and disseminate clear criteria for assessing whether and how transgender-related conditions may interfere with duty performance.

Deployment policies. DoD should review and possibly adjust its deployment restrictions in line with medical and technological advances, including minimally invasive treatments and telemedicine. Such reforms could minimize the readiness impact of medical procedures that are common among transgender personnel.