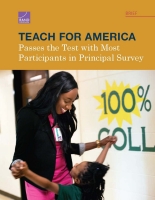 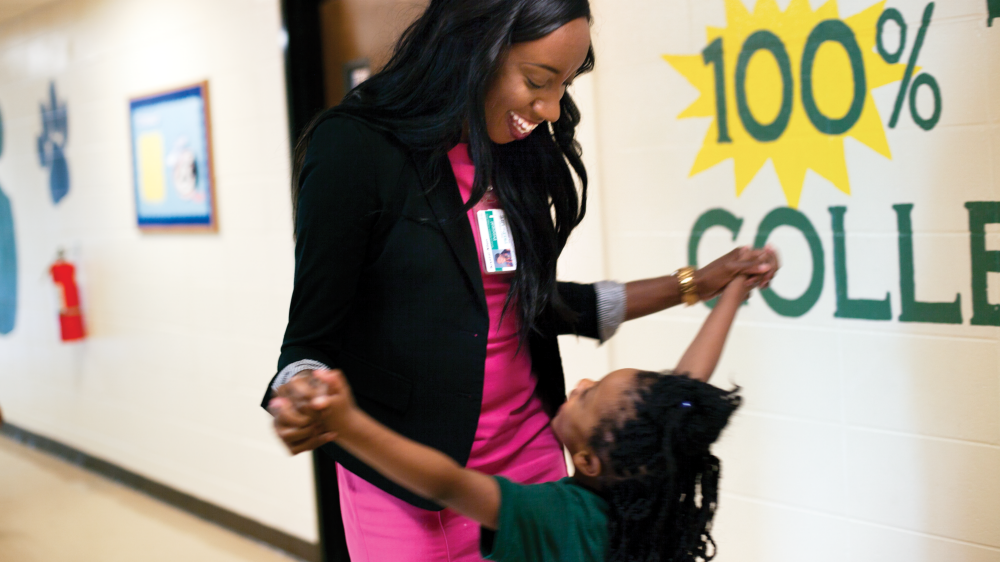 Principals who partner with Teach For America (TFA) are generally satisfied with the quality of the corps members they receive, their contributions to the classroom and culture, and the professional development and support that TFA provides to them, according to a national survey.

Nevertheless, when considering future hiring decisions, roughly one in four principals have concerns about TFA corps members’ classroom management skills and the brevity of their two-year teaching commitment.

Since 1990, TFA has worked to attract more young people with leadership potential to the teaching profession. TFA corps members commit to two years of teaching in rural and urban low-income schools. They attend a summer training program and receive coaching, support, and ongoing professional development throughout their teaching stint. Through TFA’s efforts, more than 50,000 individuals have become teachers at schools nationwide.

Today, TFA’s mission is still critical. Effective teachers are in short supply in urban, rural, high-poverty, high-minority, and low-achieving schools, which makes it difficult to close the racial and socioeconomic achievement gaps that persist in the public education system.

Teach For America Relies on Principals’ Perspectives to Evaluate Programming

The 2017 survey is the second time that RAND has administered the TFA survey; the first was in 2015. Nearly 1,100 principals representing 52 of TFA’s regions completed the 2017 survey, for an overall response rate of 43 percent. Of those who responded, the majority work in traditional public schools. Approximately one-third were charter school principals.

Since 1990, TFA has worked to attract more young people with leadership potential to the teaching profession.... Through TFA’s efforts, more than 50,000 individuals have become teachers at schools nationwide.

Most survey questions have changed since 2015, so the majority of 2017 results cannot be directly compared with prior years’ results. Consequently, the survey might best be viewed as providing a snapshot in time that reflects principals’ perceptions of the program. That said, the 2017 and 2015 results are quite similar.

Principals Are Generally Satisfied with Teach For America Corps Members

The survey found that 86 percent of principals who responded to the survey were satisfied with the corps members at their schools, compared with 81 percent in 2015 (total of “somewhat agree,” “moderately agree,” and “strongly agree”; see Figure 1). Principals reported that TFA corps members had a positive impact on student growth (78 percent); contributed to a positive, collaborative professional culture (89 percent); built strong relationships within the school community (88 percent); and demonstrated leadership (81 percent).

Most principals were satisfied with the quality and diversity of the pool of TFA corps members they had to choose from. More than three-quarters of principals believed that the pool of TFA corps members had the orientations, skills, and content knowledge needed to be successful at their school (79 percent); met or exceeded the hiring principals’ expectations for them (83 percent); and reflected the diversity that their school looks for in teaching staff (76 percent).

More than 90 percent of principals were familiar with at least one aspect of the training and support activities that TFA provides to corps members. Further, the vast majority of those respondents (88 percent) found the training and support activities to be satisfactory. Activities include a summer institute, coaching, group professional development sessions, access to the broader TFA network, access to university partners, and experiential community-learning opportunities.

Most Principals Would Hire Another Teach For America Corps Member, Though Some Have Concerns 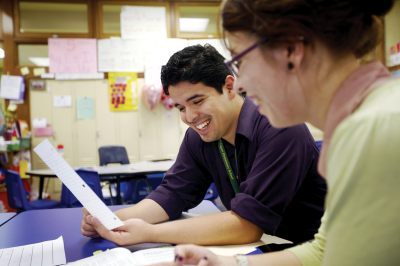 Eighty-two percent of principals were willing to hire another TFA corps member in the future, and 88 percent would recommend hiring corps members to other principals. The reasons they cited most were the corps members’ fit with school culture (84 percent), level of collaboration with staff (83 percent), and impact on student outcomes (82 percent; see Figure 2).

As with the 2015 survey, though satisfaction was high among all principals, those who were TFA alumni or who led charter schools were significantly less likely than other principals to report positive feedback about corps members’ abilities to create classroom environments that supported student growth and achievement.

What TFA Can Do to Address the Challenges

Taken together, the results of this survey suggest that principals are generally satisfied with corps members, alumni, and the support that TFA provides to corps members. However, as in 2015, principals voiced some concern about corps members’ classroom management skills, and a discrepancy resurfaced in how principals who were TFA alumni and/or charter school leaders view TFA corps members and the support TFA offers, as compared with their peers. Based on the findings, the authors make several recommendations.

Investigate the Sources of Principal Dissatisfaction

The greatest apprehensions principals reported about hiring corps members were their two-year teaching commitment and classroom management skills. TFA could address the first issue by better communicating to principals the number of corps members who remain in the classroom beyond their two-year commitment and comparing retention rates among new teachers versus TFA corps members. To better understand the classroom management issue, TFA could organize follow-up interviews or focus groups with selected principals and use the results to inform its professional development efforts.

Most principals were familiar with TFA’s summer institute and coaching, but far fewer knew about the other training and support opportunities that TFA provides. TFA should consider educating principals about the full spectrum of TFA professional development. Armed with this knowledge, principals could recommend specific coaching for a corps member or otherwise leverage TFA’s training opportunities to the benefit of their schools.

This research was conducted by RAND Education.