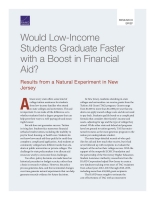 Would Low-Income Students Graduate Faster with a Boost in Financial Aid?

Results from a Natural Experiment in New Jersey

Almost every state offers some kind of college tuition assistance for students from low-income families who attend in-state colleges and universities. This aid is important: It can make all the difference as to whether students finish a degree program that can help pave their way to a well-paying job and meaningful career.

But aid does not guarantee success. Tuition is rising fast. Students face numerous financial setbacks besides tuition, including the inability to pay for food, housing, or health care. Students do not know how much aid they qualify for until they complete a complicated application. And students at community colleges have different needs than students at public universities or private colleges. The challenge for state policymakers is to allocate aid resources wisely to overcome these challenges.

Too often, policy decisions are made based on historical precedent or budget scarcity, rather than a basis in research evidence. However, the policy process generates data, and the incremental changes over time generate natural experiments that can help generate research evidence for future decisions.

In New Jersey, residents attending in-state colleges and universities can receive grants from the Tuition Aid Grant (TAG) program. Grants range from $1,000 to more than $12,000 per year that students can apply toward college costs and do not need to pay back. Students qualify based on a complicated formula that considers their family's income and assets, adjusting for age and the type of college they attend. While other state and federal aid programs have lost ground to tuition growth, TAG has maintained its status as the most generous program in the nation per undergraduate student.

The state keeps detailed records of who qualifies for aid and how much they receive, but it had never followed up with recipients to evaluate the impacts of the aid on their college success. With the support of the nonprofit ECMC Foundation and the partnership of the New Jersey Higher Education Student Assistance Authority, researchers from the RAND Corporation helped New Jersey to create a new database tracking seven years of TAG recipients from school years 2012–2013 through 2018–2019, including more than 450,000 grant recipients.

The RAND team sought to estimate the cost-effectiveness of TAG with an innovative analytical strategy. They focused on groups of students who had similar starting points—attending the same colleges in the same years, with similar family incomes—but who qualified for different amounts of grant aid. The TAG program's eligibility thresholds, developed over years of incremental policy changes, meant that students with similar financial backgrounds could have aid differences of up to $1,000. This gave the research team a unique opportunity to investigate whether increases in college persistence and graduation were brought about by the boost in TAG aid.

Focusing on eligibility thresholds is not a new idea, but RAND researchers combined hundreds of different thresholds to evaluate how aid effectiveness varied by family financial resources. The research team considered how TAG works differently across the state's many different higher education institutions: community colleges, public universities, and private nonprofit colleges. This brief summarizes some key findings, with details in a full report freely available online.

The TAG program works like many others: It requires students to submit a detailed application describing their family income and resources, and it awards larger grants to students with fewer resources and greater financial need. TAG uses information from the Free Application for Federal Student Aid—which is also used by many other states and by the federal government to distribute student loans, work-study, and grant aid—but New Jersey calculates its own unique eligibility formula. Students must reapply every year they attend college.

TAG aid is distributed in tiers. Students in the lowest-income (highest-need) group have New Jersey Eligibility Index (NJEI) scores below 1,500, and they account for about 45 percent of all TAG recipients. They get the largest awards, which account for about 55 percent of the state's total TAG expenditures. Students at lower levels of financial need receive smaller grants.

Figure 1 shows how TAG eligibility works across institutions in three sectors. Tuition—and therefore TAG aid—is highest at the private nonprofit colleges that are members of the Association for Independent Colleges and Universities in New Jersey (AICUNJ). Tuition and grant amounts are lower at the public colleges and universities, and lower still at the community colleges (called county colleges in New Jersey).

The stairstep shape of the eligibility function means that some students facing the same expenses, and with nearly the same family financial resources, could receive sharply different amounts in aid. For example, a student with an NJEI score of 1,500 qualified for a TAG award of about $8,000 per year at public universities during the period of the RAND study. A student with just slightly greater need and an NJEI score of 1,499 qualified for $9,000 per year.

These amounts of TAG aid are substantial when compared with the costs that college students face. TAG combines with federal grants and loans, institutional discounts, and other sources of aid to pay for students' costs of attendance. Students with additional aid beyond tuition and fees receive a check to pay for living expenses. Receiving an additional $1,000 might mean that students could afford housing or food without having to work as many hours, saving time for studying and potentially accelerating degree completion.

The research team compared students who received different amounts of TAG aid, holding all else constant. They achieved this by focusing on groups of students on either side of the eligibility cutoffs.

The research team took several steps to validate their study design. They made sure, for example, that there was no evidence of manipulation in which more students ended up just above a cutoff where more aid was available. When selecting groups of students, focusing too widely draws comparisons between students with very different starting points, potentially introducing bias and attributing the effects of TAG to preexisting differences between students. However, focusing too tightly leads to unstable estimates that could be thrown off by a few students. Applying a relatively new statistical procedure to balance these two concerns, the researchers selected nonoverlapping groups of students and sorted them into groups with similar incomes, attending similar institutions, and at the same point in their college careers.

The top two bars in the figure compare students' rate of persistence after receiving TAG at any point in their college career, averaging over all types of colleges and universities. A student persists if they complete a degree or they stay enrolled in the next school year, and 82 percent of students accomplished this. For this outcome, the effect of an additional $1,000 in TAG aid was small (estimated to be around 1 percentage point) and could not be distinguished from zero effect. The estimates were similar regardless of income.

The next two bars in the figure track four-year graduation from public universities. After receiving a TAG grant in their first year, about 35 percent of university students went on to graduate with a bachelor's degree in four years. An additional $1,000 in TAG aid increased that rate by 2.6 percentage points. The effect appeared to be smaller for the lowest-income group.

In other sectors, the effects on four-year graduation appear to be larger for the lowest-income group. At the county colleges, there was suggestive evidence that an additional $1,000 in TAG aid significantly increased students' four-year completion rates (from an overall average of 32 percent), but only for the lowest-income group. For the county colleges, four-year completion is defined as having earned a certificate, completing an associate degree, or transferring to a university within four years of receiving TAG.

The story at private colleges is more complicated. The four-year graduation rate in the sample was higher to begin with, at 42 percent of students. There was a negative effect estimate outside of the lowest-income group, indicating that the students who initially received more TAG aid were less likely to have graduated in four years than students who started with less TAG aid. Both groups ended up with similar graduation rates by six years out. More research is needed to understand this puzzling result, but one possibility is that TAG aid crowded out other sources of aid and did not increase students' financial resources.

The overall conclusions demonstrate success but also room for improvement. TAG is clearly helpful for many students, but the financial challenges of college still lead to dropout for other students. New Jersey is pursuing a goal of college degrees for 65 percent of its adult population by 2025. TAG will play an important role in helping reach that goal, and the study suggests that increased funding for TAG could accelerate progress by supporting faster degree completion. As leaders continue to develop programs and policies to make college more affordable, they should focus resources where aid is likely to have the largest impact. This includes supporting students at public colleges and universities broadly and potentially shifting more resources to the lowest-income students at community colleges and private colleges and universities.

The research described in this report was sponsored by the ECMC Foundation and conducted by RAND Education and Labor.