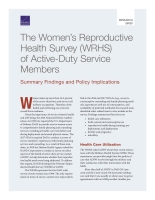 Women make up more than 16.5 percent of the active-duty force and serve in all military occupations. Therefore, their health and well-being are critical to overall force readiness.

Given the importance of service women's health and well-being, the 2016 National Defense Authorization Act (NDAA) required the U.S. Department of Defense (DoD) to provide service women access to comprehensive family planning and counseling services, including at health care visits before and during deployment and annual physical exams. The 2017 NDAA required DoD to conduct a survey of service members' experiences with family planning services and counseling. As a result of these mandates, in 2018 the Defense Health Agency asked the RAND Corporation to conduct a survey on select aspects of the health of active-duty service women (ADSW) to help determine whether their reproductive health needs were being addressed. To address this request, RAND developed the Women's Reproductive Health Survey (WRHS) of ADSW.

The WRHS represents the first DoD-wide survey of only women since 1998. The only requirements in terms of survey content were topics identified in the 2016 and 2017 NDAAs (e.g., access to contraceptive counseling and family-planning methods, experiences with use of contraceptives, and availability of preferred methods); the research team identified other related items to also include in the survey. Findings summarized here focus on

Birth Control and Contraceptive Use

About half (50.5 percent in DoD, 41.9 percent in the Coast Guard) of ADSW who reported trying to access birth control through the MHS since joining the military said that they were able to do so without delay. But 18.3 percent of DoD ADSW and 21.0 percent of Coast Guard ADSW said that they have been unable at least once to get their preferred method of birth control from the MHS. Birth control pills were the most common preferred method not available, and lack of availability at a duty location was the most common reason for not obtaining a preferred method. Figure 2 shows the proportion of ADSW by service branch reporting no delay in accessing birth control through the MHS, as well as the proportions who were unable to get their preferred method at least once from the MHS.

Among DoD ADSW, 16.8 percent reported that their menstrual cycle interferes with their job at least a week each month, as did 10.3 percent of those in the Coast Guard. Most ADSW (63.9 percent DoD, 60.3 percent Coast Guard) said that they have at some time needed or wanted to regulate or suppress menstruation since joining the military; they did so most often through use of birth control pills or IUDs.

The WRHS asked about ADSW's experiences with contraceptive counseling prior to deployment, as well as access to their preferred birth control during deployment. Overall, 21.9 percent of ADSW in DoD and 28.4 percent in the Coast Guard reported being deployed within the past 24 months.

Among ADSW with an unintended pregnancy in the past year, 48.7 percent of those in DoD and 57.1 percent in the Coast Guard reported using no contraception in the month prior to their pregnancy. Among those who were using contraception, roughly equal proportions said either that their method failed or that they were using it inconsistently. Among ADSW with unintended pregnancies who were not using birth control, the most common reasons for not doing so included worries about the side effects and not thinking that they could get pregnant.

The WRHS assessed the prevalence of both general infertility, commonly defined as trying to get pregnant for 12 months or more without success, and doctor-diagnosed infertility unrelated to age.

Overall, 15.2 percent of DoD ADSW and 10.7 percent of those in the Coast Guard reported that they had tried to conceive for 12 months or more without success. Similarly, 12.4 percent of those in DoD and 12.1 percent in the Coast Guard said that a doctor had told them that they have fertility problems not related to age. About 2 percent (2.5 percent DoD, 1.9 percent Coast Guard) reported doctor-diagnosed fertility problems for their male partner. Figure 8 summarizes ADSW infertility rates by service branch.

Cryopreservation ("egg freezing") is a method that women might use to try to prolong fertility, in an effort to postpone parenting until later in their careers. It is not covered by TRICARE. About 1 percent of ADSW (1.1 percent DoD, 0.9 percent Coast Guard) have undergone this procedure. About half of ADSW (53.4 percent DoD, 46.8 percent Coast Guard) said that they would consider it, but most of these said that they would do so only if costs were completely covered by TRICARE.

The WRHS was, in part, designed to help DoD identify reproductive health issues that may affect readiness and well-being among ADSW and how to address such issues. As a result, there are several policy implications related to the findings:

The WRHS was a web-based confidential survey, fielded between August 2020 and November 2020. The representative sample included randomly selected ADSW in the U.S. Air Force, Army, Marine Corps, and Navy, excluding trainees and those above flag rank, and a census of Coast Guard ADSW below flag rank.[a] The total sampling frame was 249,128 ADSW.

The final analytic sample consisted of 23,950 ADSW who responded to the survey and completed at least 50 percent of questions on contraceptive access. The overall response rate was 17.8 percent, varying from 12.5 percent for the Navy to 38.0 percent for the Coast Guard.

Missing data were imputed using a sequential imputation model with predictive mean matching. Less than 4 percent of data were missing, most of which was due to survey drop-off. All analyses use analytic weights that are the product of design weights (which account for the sampling approach) and nonresponse weights (which account for differential propensity for response based on respondent characteristics). Use of the weights results in a representative sample on many important demographic and military characteristics (e.g., age, race/ethnicity, marital status, education level, number of dependents, service branch, pay grade, years of service, occupation code, recent deployment, and Armed Forces Qualification Test score). Readers interested in these differences should consult the full WRHS report.

There are several limitations to this research. First, WRHS response rates were low, although higher than in many recent DoD-wide surveys. Second, for some groups (e.g., recently deployed Marine Corps ADSW), sample sizes are small. Third, the survey language did not specify whether care provided within the MHS refers only to direct care at military treatment facilities or also includes care elsewhere through TRICARE. The survey also did not explicitly include Coast Guard clinics as part of MHS care. Fourth, the survey was fielded during the COVID-19 pandemic, although the impact of the pandemic on the study is not necessarily obvious. The pandemic might have limited access to DoD email for remote workers or negatively influenced perceptions of available care, but it also might have led to greater schedule flexibility, affording time to complete the survey.

a Note that the Space Force is not included in the survey as a separate branch and is treated as part of the Air Force in the analysis. At the time of the survey, the female Space Force population was too small to sample on its own.