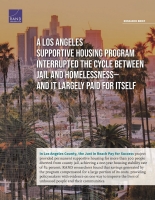 In Los Angeles County, the Just in Reach Pay for Success project provided permanent supportive housing for more than 300 people diverted from county jail, achieving a one-year housing stability rate of 82 percent. RAND researchers found that savings generated by the program compensated for a large portion of its costs, providing policymakers with evidence on one way to improve the lives of unhoused people and their communities.

66,000 people experience homelessness in Los Angeles County on any given night

Research has shown that, among the many dynamics that drive this crisis, incarceration increases the likelihood of homelessness, and vice versa. In Los Angeles County, this has resulted in jails providing default housing and services to unhoused individuals who struggle with mental health issues and substance use disorders.

To help break the incarceration-to-homelessness cycle, Los Angeles County and community stakeholders designed the Just in Reach program. Just in Reach supports people with disabilities and histories of homelessness who have been incarcerated in the county jail system with holistic services, including permanent supportive housing. The program diverts individuals from jail into the community, placing participants into subsidized housing with case management support—including tenancy support, medication management, and other services.

Los Angeles County approved the Just in Reach program as its first "pay for success" initiative, in which private sector investors fund a project with the possibility of being paid back with interest by the government once specific project milestones are achieved. RAND researchers evaluated the Just in Reach Pay for Success (JIR PFS) permanent supportive housing program to answer two primary questions: Who was enrolled in JIR PFS, and did placement in the program change participants' use of county services and the costs associated with those services? 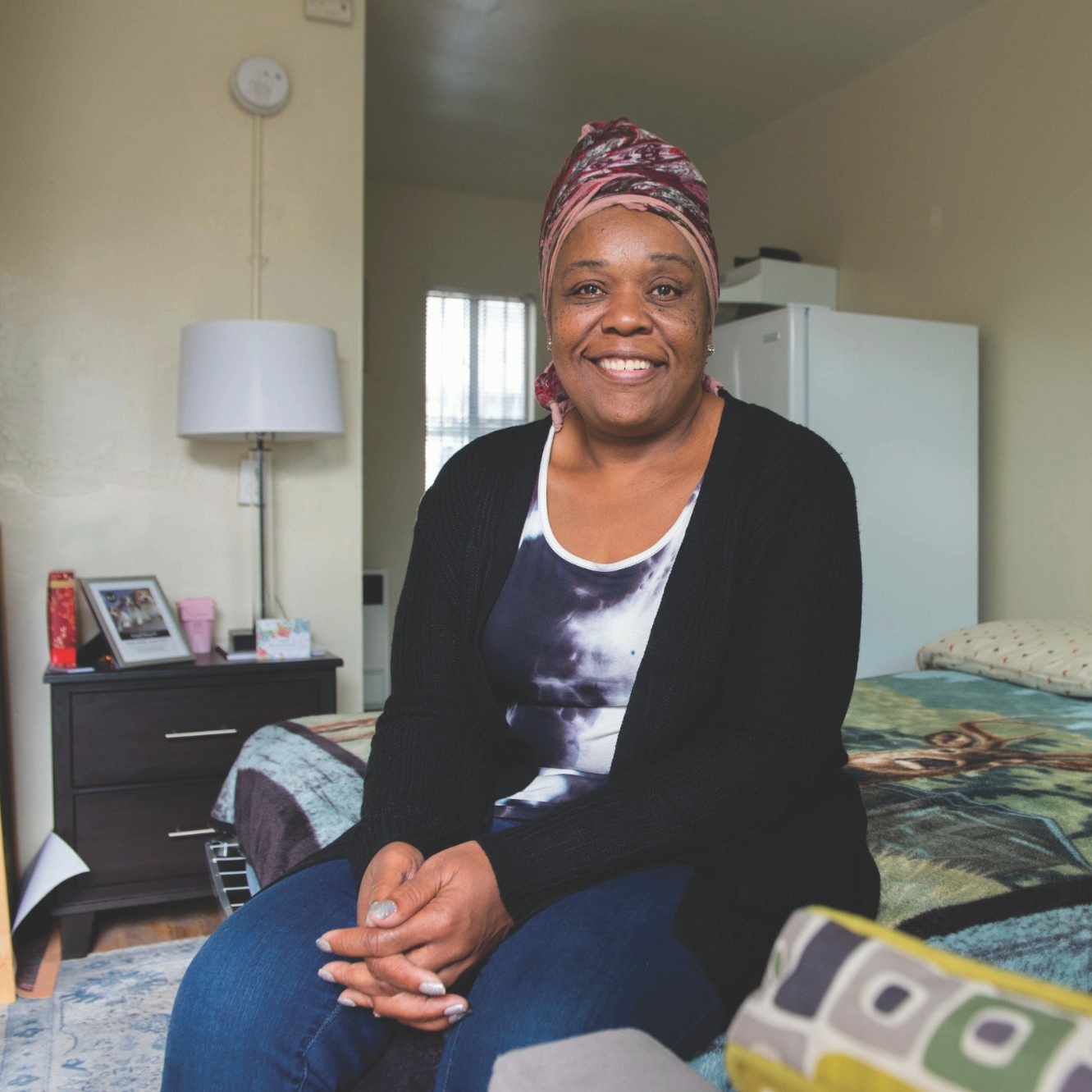 Tanya Beverly, a participant in the Just in Reach Pay for Success project, is seen here in her supportive housing apartment.

Who Participated in Just in Reach Pay for Success?

Program participants were formerly incarcerated in Los Angeles County jail and were identified by the Los Angeles Office of Diversion and Reentry as candidates for clinical diversion into that office's existing permanent supportive housing program. Criteria for participation included a background of homelessness and a chronic health condition, typically a serious mental health disorder.

In October 2017, Los Angeles County initiated the JIR PFS program, and by September 2019 the program had enrolled 349 participants into permanent supportive housing. In the research report Just in Reach Pay for Success: Impact Evaluation and Cost Analysis of a Permanent Supportive Housing Program, RAND researchers estimated net county program costs of $6,202 per participant per year. The researchers found, with a 95-percent level of confidence, that between 42 percent and 113 percent of permanent supportive housing costs in the first year were offset by cost reductions in other areas.

Although county service use varied substantially from participant to participant, the analysis shows that, on average, most of the program's costs were offset by a reduction in the use of other county services. It was not possible to capture all costs related to participants' use of county services, but the results indicate that permanent supportive housing may provide a feasible, cost-effective alternative for addressing homelessness among individuals with chronic health conditions who also are involved with the justice system in Los Angeles County.

Funding for JIR PFS and the broader permanent supportive housing programs has expired, and new funding hasn't been included in future Los Angeles County budgets. The RAND analysis, however, may buttress the case for further development of permanent supportive housing programs if policymakers are seeking successful, cost-effective approaches to addressing homelessness.

In terms of the services used by JIR PFS participants, the RAND researchers found reductions in use of jail services, both in absolute terms and relative to a comparison group that didn't take part in the program. The permanent supportive housing provided by JIR PFS was also associated with less reliance on crisis services, such as emergency shelter use, and significant reductions in physical and mental health inpatient stays and associated costs.

Moreover, as with other studies of similar programs, the RAND researchers observed increases in the use of outpatient services, particularly for mental health services, consistent with the goal of "Housing First" approaches to engage participants in ongoing, needed care that is not crisis-oriented and does not require inpatient stays.

Developing the Just in Reach Pay for Success Program

In 2015, the Los Angeles County Board of Supervisors approved Just in Reach as a "pay for success" initiative, with investment funding from the Conrad N. Hilton Foundation and UnitedHealthcare. The JIR PFS model was embedded into the existing Los Angeles County Office of Diversion and Reentry (ODR) supportive housing program, as shown below.

How Participants Experienced Just in Reach Pay for Success

The ODR supportive housing program consists of pre-release jail in-reach services, including psychosocial assessments and housing needs assessments, followed by connection to interim housing and intensive case management services immediately upon an individual's release from jail after being deemed appropriate for clinical diversion.

Once a longer-term placement is identified, the individual is transitioned from interim housing into permanent supportive housing, where continued intensive case management services help the participant maintain their housing and support their health and well-being by connecting them to services. Only individuals who were placed into permanent supportive housing by ODR between October 2017 and September 2019 were eligible to be part of the JIR PFS program.

The RAND researchers used data from Los Angeles County to analyze participants' demographics, their use of services, and associated costs. They examined 336 participants' progression through key program milestones to permit analysis of service use and costs before and after participants' jail release, during their period in ODR interim housing, and after their placement in the JIR PFS. (While 349 individuals were placed in the program, 13 were dropped from the analysis because of data issues.)

To determine the effects of the JIR PFS program on service use and costs, the researchers also performed an analysis comparing changes in service use among participants relative to a group of 672 individuals who didn't receive permanent supportive housing and who were identified via propensity score matching, a way of ensuring meaningful comparisons with the participant group.

The RAND team also conducted a sub-analysis examining outcomes among JIR PFS recipients who received a full 12 months of permanent supportive housing. Additionally, the research team examined service use and costs for two years post placement in permanent supportive housing, and they analyzed the relationship between participants' race/ethnicity and housing stability. 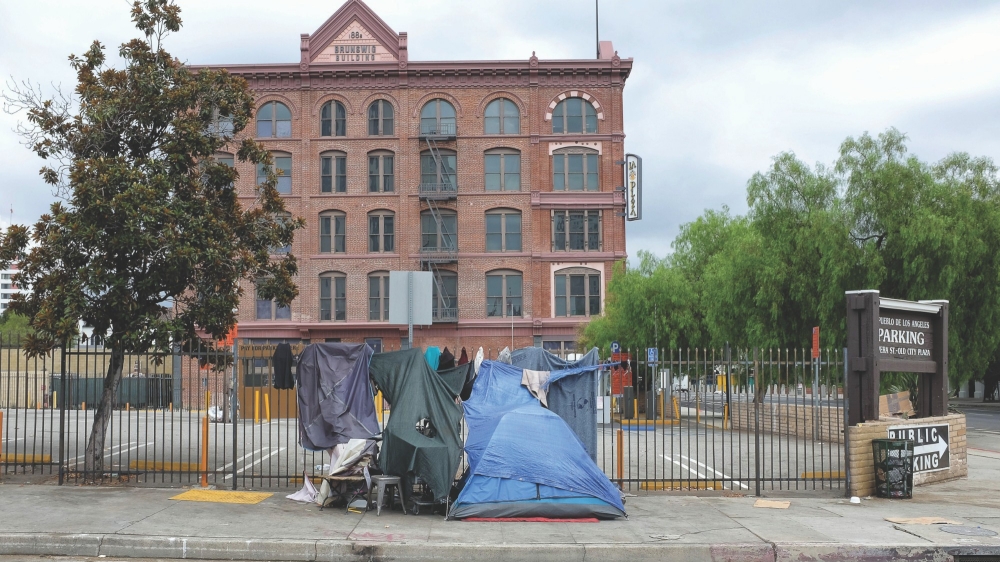 Tent at the Old City Plaza at Arcadia and Main Streets.

Program costs associated with permanent supportive housing and more frequent use of mental health outpatient care and probation services among those in the JIR PFS group were, to a large extent, offset by cost savings in other areas—most notably, less county jail time, fewer inpatient stays and emergency department visits, and less temporary housing use relative to the comparison group.

It wasn't possible to include in the analysis all county service costs that JIR PFS participants may have incurred. For instance, services rendered by the Los Angeles Department of Public Health, Division of Substance Abuse Prevention and Control—including outpatient treatment, opioid treatment, residential treatment, and withdrawal management—could not be tracked on an individual level. The researchers note, however, that no more than 13 percent of participants used those services during any one of the study periods, providing a notional boundary to the associated costs. Other potential costs, such as interactions with law enforcement officers in the field and court costs, were also not included in the analysis.

In evaluating the costs of services provided, it's important to remember that permanent supportive housing was primarily designed to increase housing stability, not achieve cost savings. The one-year housing stability rate among the analytic sample was 82 percent, in line with rates reported elsewhere among similar programs.

Highlights of the Cost Analysis

In summary, the research team found that the JIR PFS program was associated with the following changes in service use and associated costs:

The finding that the JIR PFS program successfully housed formerly incarcerated people and offset a large portion of its costs may energize policymakers tasked with finding solutions to the social and health problems associated with homelessness in Los Angeles County and beyond. Likewise, advocacy communities, academics, and voters may consider whether cost-effective permanent supportive housing has the potential to scale up as a response to growing homelessness. Stakeholders across the spectrum can consider the RAND research results as they weigh alternatives to incarceration and the value of breaking the incarceration-to-homelessness cycle.

Although not all county service costs could be accounted for in the RAND analysis, policymakers should note the significant savings, primarily to the Los Angeles County jail and secondarily to the inpatient and emergency health care systems, associated with permanent supportive housing. The study results also suggest the need for outpatient mental health services and probation services among the population placed in permanent supportive housing. If similar programs were to expand, those services would also need to grow.

Together, these findings suggest that permanent supportive housing may provide a feasible alternative to incarceration for many individuals suffering from chronic health conditions. Eighty-two percent of participants achieved a 12-month stability rate, demonstrating the positive association between housing provision and reductions in criminal justice service utilization among the majority of participants. Exploration of the characteristics among the minority of participants who do not achieve housing stability from this program is warranted.

First, the research team noted that it is possible the participants in JIR PFS used a range of important services provided by Los Angeles County or other entities that the study didn't capture, such as pharmacy spending and some court and law enforcement costs.

Second, although the research team selected the comparison group to provide meaningful contrasts to the JIR PFS group, the possibility remains that there are some important unobserved differences between the two groups that could not be accounted for in the analysis.

Third, the COVID-19 pandemic unquestionably had significant effects on the provision of county services tracked in this analysis. However, the pandemic overlapped with only a small portion of the period the analysis covered (on average, 8 percent of the 12-month follow-up period for JIR PFS participants). Given the small overlap, there is not much evidence surrounding the pandemic's effects on the primary report findings.

This research was sponsored by the project financing of the Just in Reach Pay for Success (JIR PFS) initiative through the JIR PFS, LLC and a grant awarded to the Corporation of Supportive Housing through the Department of Housing and Urban Development/Department of Justice Pay for Success Permanent Supportive Housing Demonstration Program. The work that provided the basis for this publication was supported by funding under an award with the U.S. Department of Housing and Urban Development. The substance and findings of the work are dedicated to the public.