How increasing languages education in the UK could benefit the economy

A research report from the University of Cambridge and RAND Europe shows that investing in languages education in the UK could return more than the investment cost.

Researchers explored a gap in the evidence relating to the economic benefits of extending languages education and found that an increase in secondary-school pupils learning one of four different languages could increase UK GDP by billions of pounds over 30 years.

The benefit-to-cost ratios are estimated to be at least 2:1, meaning that every £1 spent on extra language provision could return about £2 for the UK economy.

The study first assessed the economic value of languages to the UK in general and then evaluated the potential economic benefits to the UK of extending languages education for secondary-school pupils.

The idea behind the analysis was not to reduce education in STEM (Science, Technology, Engineering and Mathematics) or other subjects considered essential but to demonstrate the value of improving the quality and quantity of languages education.

In a closely interconnected world, the ability to communicate in different languages has become increasingly important for the globally integrated business community. However, the UK has experienced a sharp drop overall in the number of pupils learning languages since 2004.

At a time when the UK government seeks to reset its global economic relationships as part of its vision of 'Global Britain', this research shows that such a decline in languages could have negative effects on the UK's ability to compete internationally.

The economics of language

Languages are vital for communication. Existing evidence suggests that languages play a significant role in international trade and that not sharing a common language acts as a non-tariff trade barrier. In other words, sharing a common language can reduce trade barriers and foster trade in a similar way to free-trade agreements and other preferential trade-cooperation agreements.

The ability to communicate with others is not only a valuable skill for the labour market but also for the individual. Language skills tend to increase a person's human capital. Empirical evidence shows that learning additional languages beyond a person's native language enhances their potential to earn higher wages and that multilingual individuals have better labour-market outcomes than their monolingual peers.

In European countries, including in English-speaking Ireland, there is a wage premium for using a second language at work, i.e. the wages of those with language skills are greater than those of the population as a whole. Conversely, in the UK in many cases no direct wage premium was found. Possible reasons for this are an undervaluation of language skills by UK employers and an unwillingness on the part of business to invest in language skills. Moreover, instead of building the human capital required, many UK businesses rely on hiring people from abroad with the necessary language skills.

The study demonstrates how sharing spoken languages can reduce trade barriers. The analysis used an established econometric model to investigate the association between the ability to communicate in a spoken language and bilateral trade flows. The research found that there is an increase in bilateral trade in certain sectors. Specifically, a 1 per cent increase in the probability that two people from two countries meet at random and are able to communicate with each other increases bilateral trade in mining and energy by 2.4 per cent and trade in services by 0.6 per cent.

UK exports are also predicted to rise if there is an increase in the number of languages shared with its trading partners. The report shows that the removal of language barriers with trading partners from Arabic-, Chinese-, French- and Spanish-speaking countries could increase UK exports annually by about £19bn.

A sensitivity test comparing the relative importance of English versus other languages with regard to bilateral trade flows shows that while the UK does have a comparative advantage because of the global nature of English as a lingua franca, English is not the sole driver in certain key trade sectors such as mining and energy, and services. Other languages matter equally, if not more, in reducing trade barriers.

Quantifying the economic benefits for the UK economy

To estimate the economic benefits, researchers used a macroeconomic model to examine UK economic performance between now and 2050 if more pupils aged between 11 and 16—Key Stage 3 (KS3) and Key Stage 4 (KS4)—were to learn to speak one of four different languages which could later be used effectively in business.

The analysis demonstrated that a 10 per cent increase in UK pupils learning Arabic in KS3/KS4 could cumulatively increase UK GDP by between £11.8bn and £12.6bn over 30 years, compared to a baseline scenario in which the current levels of language provision in schools do not change. This corresponds to about 0.5% of the UK's GDP in 2019.

Researchers calculated the benefit-to-cost ratio by applying a range of education cost estimates per pupil per year for each of the four languages under consideration. The costs were based on the government's successful Mandarin Excellence Programme (see box below).

The resulting findings of a 2:1 benefit-to-cost ratio for each language demonstrated that there are identifiable returns for investing in languages education, not just in economic terms but also in producing workers with the language skills needed for the UK to compete internationally. 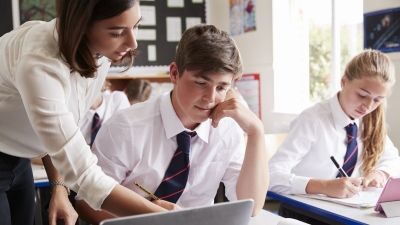