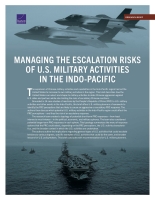 Managing the Escalation Risks of U.S. Military Activities in the Indo-Pacific

Grounded in 14 case studies of reactions by the People's Republic of China (PRC) to U.S. military activities and other events in the Indo-Pacific, this brief offers U.S. military planners a framework to identify the PRC perceptions that are likely to cause an aggressive or escalatory PRC response. The authors then discuss which potential U.S. military activities in the Indo-Pacific region could affect the PRC perceptions—and thus the risk of an escalatory response.

The research team created a typology of potential short-term PRC responses—from least intense to most intense—in the political, economic, and military spheres. The team also considered potential longer-term PRC responses in each sphere. This typology summarizes the menu of response options that the PRC could select, depending on the PRC perceptions, the U.S. activity characteristics, and the broader context in which the U.S. activities are undertaken.

The second component of the framework is the set of U.S. military activity characteristics that would most likely influence China's behavior. How might these activities affect Chinese perceptions and motivate China to pursue different responses? The research team considered four characteristics of potential U.S. military activities—the location, the U.S. ally or partner involved, the military capabilities involved, and the activity's profile or messaging—and how each one could affect China's key perceptions. Table 1 itemizes the types of activity characteristics.

How PRC perceptions and U.S. activities interact to affect PRC responses will also depend on the relevant context, meaning prior events and history that relate specifically to the activities. For example, if the U.S. military were to conduct a joint exercise with an ally or partner, the relevant context could include the following factors:

The third component of the framework is a typology of PRC responses that could result from the interaction of Chinese perceptions and U.S. activities. Beijing may choose different policy options to send different messages to the United States or other regional actors. The top part of Table 2 specifies potential short-term PRC responses, from less aggressive to more aggressive. China could also decide to respond in a limited fashion in the short term while investing substantially in longer-term responses that might ultimately be of greater concern to U.S. policymakers. The higher the level of Chinese concern with a U.S. military activity, the larger the potential for China to undertake a longer-term shift in policy. The bottom part of Table 2 specifies potential longer-term PRC responses to U.S. military activities.

How U.S. Military Activities in General Could Influence the Risk of PRC Escalation

From the three-step framework presented earlier, one can draw general lessons and rules of thumb. Table 3, for instance, highlights several U.S. military activity characteristics that are likely to be associated with increasing degrees of PRC escalation (from the bottom up) across the four key activity categories.

While it may sometimes seem that every U.S. military activity or every characteristic of such an activity may heighten PRC concerns, Table 3 highlights that there are relatively consistent hierarchies to PRC concerns, with two patterns in particular associated with the most acute escalation potential. First, each characteristic has the potential to heighten PRC concerns about Taiwan, whether through proximity, direct involvement of Taiwan, or the demonstration or messaging of capabilities for Taiwan's defense, and these concerns are likely to be linked to higher degrees of escalation potential. Second, threats to PRC command and control or nuclear targets, which are of substantial concern to China, may be driven by the location or capabilities involved in the activity—or, more likely, a combination thereof.

How Specific U.S. Military Activities Could Influence the Risk of PRC Escalation

The researchers then considered a set of potential, specific military activities that the United States could undertake in the Indo-Pacific. Considering the breakdown of escalation possibilities in Table 3, the team derived examples of how each level of PRC response intensity could be driven by hypothetical U.S. military activities and characteristics. While purely hypothetical—and, in fact, contingent on the broader context in which the activities might occur—these examples can help inform U.S. military planners about possible PRC reactions to particular activities, as shown in Table 4.

Carefully consider activities that directly involve Taiwan, because these have the most potential to lead to an escalatory response by China. The three characteristics of U.S. military activities that have the greatest escalatory potential are those taking place on Taiwan, those including Taiwanese forces, and those involving capabilities that substantially enhance the defense of Taiwan. Even the profile or messaging of U.S. activities directly involving Taiwan would be carefully scrutinized for signals that the United States was encouraging Taiwanese independence.

Aggregate lower-risk activities involving Taiwan. Activities at the lower end of the escalation risk spectrum, when aggregated in larger numbers or over time, could potentially enhance Taiwan's defense but with less likelihood of stoking a disproportionately aggressive PRC response. While any activities involving Taiwan would raise China's level of concern, judicious use of lower-risk activities could still enable the United States and Taiwan to substantially augment defense cooperation.

U.S. activities that could enable strikes on PRC regime or nuclear targets should be scrutinized with particular care. Deploying exquisite ISR and long-range strike capabilities that could threaten PRC regime survival or the PRC nuclear deterrent could lead to similarly aggressive PRC reactions. China would likely perceive threats to its nuclear deterrent as justifying an aggressive response. The ability of U.S. conventional precision-strike weapons to hold China's nuclear forces at risk has already compelled China to invest in conventionally armed short-, medium-, and long-range ballistic and cruise missiles and to develop boost-glide systems that allow the Chinese military to target U.S. forces outside of the region. U.S. or allied capabilities that would threaten China's nuclear deterrent could therefore be met with a potentially escalatory response.