This study examined U.S. Department of Defense permanent change of station programs to determine the potential for savings that could accrue by increasing the amount of time between moves. The research reviewed current policies and investigated the potential for incentive programs to encourage servicemembers to stay longer at their current stations. Potential implementation of an auction program was also discussed. 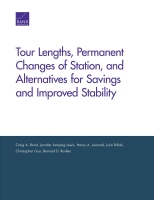 Tour Lengths, Permanent Changes of Station, and Alternatives for Savings and Improved Stability

The U.S. Department of Defense (DoD) moves about one-third of its military servicemembers each year. This study was designed in part to support DoD in preparing a report for Congress on its permanent change of station (PCS) programs. It examined the workings of those programs with the goal of determining the potential for savings that could accrue from reducing the total number of PCS moves by increasing the average amount of time between them. The research covered current policies and programs, looking particularly at incentive programs designed to encourage servicemembers to stay longer at their current stations. The authors collaborated with the Defense Manpower Data Center to develop survey questions designed to collect responses on individual propensities to extend tours and the factors that influence such decisions, with emphasis on overseas tours, which are the most expensive. The analysis suggests that a substantial fraction of those serving overseas would be willing to extend their tour of service if a sufficiently attractive incentive package were offered. The authors recommend implementation of an auction mechanism that would allow servicemembers to bid for extensions to their current overseas tours. The estimated average annual savings could range from $19 million to $84 million.

Savings from an Auction-Based Program

This research was sponsored by the Under Secretary of Defense for Personnel and Readiness and conducted within the Forces and Resources Policy Center of the RAND National Defense Research Institute (NDRI), a federally funded research and development center sponsored by the Office of the Secretary of Defense, the Joint Staff, the Unified Combatant Commands, the Navy, the Marine Corps, the defense agencies, and the Defense Intelligence Community.