This report analyzes the National Guard's centrality to American national security, the idea that it prevents the United States from fighting controversial foreign wars, and its claim to embody the citizen soldier. It concludes that there are increasing tensions among these three ideals and that as the Guard has become an increasingly important tool of American national security, it has lost some of the attributes of the citizen soldier. 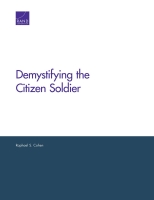 The National Guard is often portrayed as the modern heir to the colonial militia and retaining at least three of the latter's defining attributes — a key instrument of American national security, a check on federal power, and home of today's "citizen soldiers." This report explores how the term citizen soldier has been defined in academic literature — as compulsory, universal, legitimate service by civilians — and then looks at how the National Guard has evinced these attributes at various periods in its history. Since the United States' founding, the militia — and later, the National Guard — slowly evolved into an increasingly formidable warfighting force and increasingly important tool for national security. This evolution, however, has come at the expense of two other attributes of the colonial militia — serving as a check on federal power and filling its ranks with citizen soldiers. The report concludes that there are inherent and increasing tensions among being a warfighting force, serving as a check on federal power, and embodying the ideals of a citizen soldier, and it is not clear that the Guard — or any other force for that matter — can fully reconcile them. Ultimately, the Guard's transformation from citizen soldiers to a professional force may very well be inevitable and is likely a positive development for American national security. It is, however, important to realize that this trend is occurring, to demystify the citizen soldier, and to see the force for what it is.

A Citizen Soldier Is a Civilian First

The National Guard Is an Increasingly Important Tool for National Security

The research reported here was prepared for the United States Air Force and conducted by RAND Project AIR FORCE.