The U.S. Coast Guard needs to measure its operational-level performance effectively. To assist this effort, the authors created logic models detailing elements of the Coast Guard's 11 missions. After identifying and assessing the validity, reliability, and feasibility of relevant existing metrics, the authors go on to propose potential metrics that could improve on or complement existing metrics, as well as a framework for applying the metrics. 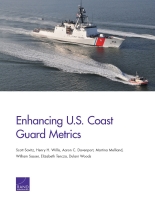 The U.S. Coast Guard needs to measure its operational-level performance effectively to make informed decisions about resource allocation. To assist the Coast Guard in this effort, the authors worked with official documentation and subject-matter experts to develop logic models describing each of the 11 statutory missions of the Coast Guard and using the descriptions to ascertain what aspects of these missions should be measured. The authors examined existing metrics in the light of these logic models, evaluating the metrics in terms of their validity (how well they measured elements of the logic models), reliability (how consistently measurements can be made), and feasibility (how readily measurements can be made). They also analyzed the extent to which existing metrics measure elements of the logic models. They then developed and evaluated sets of potential metrics that could improve on or complement the existing metrics, together with a framework for applying metrics in decisionmaking. This report describes the logic models, existing metrics, and potential metrics, including their relationships with one another and their derivation from Coast Guard sources. Note that, as of this writing, the Coast Guard is considering these findings and has not adopted them as doctrine.

Existing Metrics Do Not Capture All the Elements of These Models

The Authors Developed a Framework for Applying Metrics to Make Decisions

This research was sponsored by the U.S. Coast Guard Atlantic Area. It was conducted within the International Security and Defense Policy Center and the RAND Homeland Security and Defense Center of the RAND National Defense Research Institute, a federally funded research and development center sponsored by the Office of the Secretary of Defense, the Joint Staff, the Unified Combatant Commands, the Navy, the Marine Corps, the defense agencies, and the defense Intelligence Community.