Close air support (CAS) is about providing airborne firepower for troops on the ground who may be operating in close proximity to the enemy. For some time now, the Army has relied on Air Force A-10s to supply CAS for a variety of reasons. But partly out of concern about survivability in future conflicts, the Air Force now plans to retire the aircraft. This report examines the consequences for the Army and the alternatives it may wish to pursue. 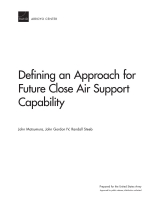 Close air support (CAS) is about providing airborne firepower for troops on the ground who may be operating in close proximity to the enemy. This proximity increases the value of such characteristics as accuracy and responsiveness. Flying at lower altitudes not only increases accuracy and speed of weapon delivery, but its show of force also affects morale on both sides. And fixed-wing aircraft, such as the A-10, are more survivable than rotary-wing aircraft under certain conditions. For some time now, the Army has relied heavily on the Air Force to provide fixed-wing CAS. The A-10 has been a mainstay of these efforts, but the Air Force has become concerned both about the cost of maintaining the aircraft and about its survivability in environments increasingly more advanced than those it has encountered in recent years. The service is planning to retire the A-10 and replace it with other aircraft, such as the F-16, in CAS roles. These aircraft may not provide all the same benefits. The Army asked RAND to look at the consequences of this decision, examine alternatives, and offer recommendations. One recommendation the authors make is that, regardless of the outcome of assessments of alternatives' capabilities, a viable replacement should be fielded before the A-10 itself is retired.

Other Assets that Perform the Mission, but There Are Drawbacks

Costs Are an Additional Concern

This research was sponsored by the Army G-8, specifically the Army QDR Office, and was conducted by the Forces and Logistics Program within the RAND Arroyo Center.