This report describes a modeling framework and lexicon for conducting a detailed analysis of future Air Force operational resilience in an anti-access/area denial (A2/AD) environment. The authors describe the Operational Resilience Analysis Model, which they built to model the impact of different courses of action for improved resilience from an operational standpoint. 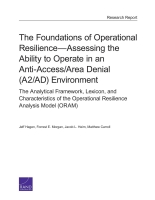 The Analytical Framework, Lexicon, and Characteristics of the Operational Resilience Analysis Model (ORAM)

Although much work has been done considering the issue of airbase resilience — especially in the Asia-Pacific region — these studies have typically focused on a single aspect of the problem (such as hardening or runway repair) but have not considered the issues in total. There is a need to view the issue more holistically, especially given the strategic implications of U.S. power projection in anti-access/area denial (A2/AD) environments. The authors of this report developed a modeling framework and lexicon for conducting a detailed analysis of future Air Force operational resilience in an A2/AD environment; the analysis itself focused on different regions (Pacific, Southwest Asia, etc.) to bound the problem and identify a robust set of strategic assumptions and planning requirements. The study was set within the context of efforts to rebalance the joint force in the Asia-Pacific region. This report describes the Operational Resilience Analysis Model (ORAM) built for this effort, which was used to evaluate the impact of different courses of action from an operational standpoint. The authors explain the ORAM model, discuss the inputs that go into modeling Blue (friendly) and Red (enemy) capabilities, and illustrate the model using a simple notional case. They conclude with some suggestions for follow-on work to improve the functionality of ORAM and to address data uncertainties in the model.

An Analysis Framework for Operational Resilience