This report makes three essential points: The world has changed following foundational defense planning; emerging and growing threats increase the likelihood that U.S. commitments will be challenged; and planned cuts to the U.S. Army will leave the nation unable to satisfy declared commitments. This report identifies the deployable ground forces necessary to satisfy our nation's commitments and to mitigate risk. 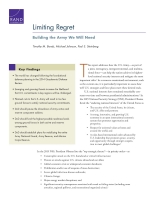 Building the Army We Will Need

This report makes three essential points: The world has changed following the foundational defense planning in the 2014 Quadrennial Defense Review; emerging and growing threats increase the likelihood that U.S. commitments in key regions will be challenged; and planned cuts to the U.S. Army will result in too few ground forces to satisfy declared commitments. In light of these concerns, this report addresses the U.S. Army capacity needed — as part of a joint, interagency, intergovernmental, and multinational force — to help the nation achieve its highest-level national security interests and mitigate the most important risks. The authors consider the terror threat in North Africa, the Middle East, and Afghanistan; potential Russian aggression against NATO Baltic states; and the threats posed by North Korea, including "loose nukes." In these three contexts, the authors assess the capability of the nation to satisfy existing commitments, given planned force reductions to the U.S. Army. The authors outline shortcomings and propose actions necessary to maintain an Army of sufficient force to satisfy U.S. commitments, meet threats with force, and avoid strategic failure and regret.

This research in the public interest was supported by RAND, using discretionary funds made possible by the generosity of RAND's donors and the fees earned on client-funded research.