The Department of Defense's Center for Excellence in Disaster Management and Humanitarian Assistance (CFE-DMHA) was established in 1994 to provide and facilitate education, training, and research in civil-military operations. This report examines CFE-DMHA's history, activities, and roles to determine how its missions can best be performed to achieve the objectives of the Department of Defense in this domain. 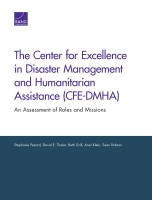 An Assessment of Roles and Missions

In recognition of the important role that the U.S. military has to play in humanitarian assistance and disaster relief, congressional legislation established the Center for Excellence in Disaster Management and Humanitarian Assistance (CFE-DMHA) in Honolulu in 1994 to provide and facilitate education, training, and research in civil-military operations. This report examines CFE-DMHA's history, activities, and roles to help determine how the missions assigned to it can best be performed to achieve the objectives of the U.S. Department of Defense (DoD) in this domain. The report finds that a center focused on disaster management and humanitarian assistance (DMHA) fulfills important needs that will only grow in the future. After identifying some key concerns with the center's functioning, including a fundamental misalignment of mission and resources, the report concludes that CFE-DMHA should not be abolished, but that it should focus, for now, on a subset of activities and missions. While the Asia-Pacific represents a priority area for DMHA, because of the prevalence and severity of disasters in that region, there is also a need for additional training, engagement, research, and information related to DMHA civil-military coordination in other regions, which a globally oriented center could provide and that the Office of the Secretary of Defense (OSD) should guide. Based on these conclusions, and after reviewing a number of courses of action, the report concludes that aligning CFE-DMHA with an existing globally oriented organization under OSD would best position the center to serve these purposes.

Global Demand Warrants a CFE-DMHA with a Truly Global Outlook

This research was sponsored by the Assistant Secretary of Defense for Special Operations/ Low-Intensity Conflict and conducted within the International Security and Defense Policy Center of the RAND National Defense Research Institute, a federally funded research and development center sponsored by the Office of the Secretary of Defense, the Joint Staff, the Unified Combatant Commands, the Navy, the Marine Corps, the defense agencies, and the defense Intelligence Community.