An increase in pilot hiring at major commercial airlines could increase the outflow of U.S. Air Force rated officers and create manning shortfalls. Because aviator retention pay is now a discretionary program, budget requests for it must be defended. The authors analyzed airline pilot supply, compensation, and demand to estimate possible changes in civilian pilot pay and hiring and the level of aviator retention pay needed as a countermeasure. 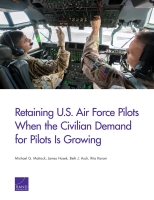 Retaining U.S. Air Force Pilots When the Civilian Demand for Pilots Is Growing

An increase in pilot hiring at major commercial airlines could increase the outflow of U.S. Air Force rated officers and create manning shortfalls. In addition, because aviator pay (AP) and aviator retention pay (ARP) are now discretionary programs under Department of Defense Instruction 7730.67 and budget requests for them must be defended, the Air Force requires a capability to help anticipate the range of possible changes in civilian pilot pay and hiring and estimate the level of AP or ARP needed as a countermeasure. The authors provide data and analysis of airline pilot supply, compensation, and demand and conclude that major airlines are increasing both pilot pay and hiring, which could decrease Air Force pilot retention. They extended RAND's dynamic retention model to include the choice of ARP contract length and airline hiring. They estimated the model using longitudinal data on Air Force pilot retention for 1990 through 2000 entry cohorts followed to 2012 and incorporated new estimates of the civilian age-earnings profile of ex-military pilots employed by major airlines. With the estimated model, they simulated the effect on pilot retention of increases in civilian pay and airline hiring, as well as the elimination of AP for pilots assigned to non-flying positions. The authors found the levels of AP and ARP needed to offset those effects and sustain Air Force pilot retention. The findings vary by case, but a range of foreseeable increases in major airline hiring and pay would require increases in ARP to at least $38,500 and potentially as high as $62,500, well beyond the current cap of $25,000 per year.

The Authors Found That Recent Trends in Civilian Pilot Demand and Changes in Supply Will Increase the Opportunity for U.S. Air Force Pilots to Be Hired by a Major Airline

The research reported here was sponsored by AF/A1P and SAF/MR and conducted within the Manpower, Personnel, and Training Program of RAND Project AIR FORCE.