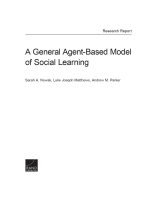 When engaging in behaviors that may entail risks or outcomes that are unknown or uncertain, individuals often look beyond their own experiences (including past behaviors and subsequent outcomes) to consider the experiences of others in their immediate social networks. This social influence at the micro-scale (i.e., the way in which individuals are influenced by their immediate social networks) can affect change in the greater social web in such a way that social networks may have profound effects on decisionmaking at the population level. Such micro-level social influence is central to many theories of individual decisionmaking and behavior. Observations of population-level dynamics at the macro-level demonstrate the end result of these processes — for example, over time, people's behavior tends to look more like that of their peers. This report describes a general agent-based model (ABM) for studying social influence, and uses that general ABM to explore the relationship between micro-influence and macro-dynamics for broad classes of problems. We also describe an approach to tailor the general ABM to model a specific behavior influenced by social learning, which we illustrate using surveys designed to inform the ABM.

The framework we developed could be useful for studying any system in which social learning may occur. But while our general ABM can produce dynamics reminiscent of those that might result from many different types of behaviors, it will typically need to be tailored when used to model any particular behavior.

The research described in this report was performed by RAND Health.