U.S. Special Operations Forces (SOF) have been deployed intensively in recent years, and this is expected to continue. SOF membership is highly selective, and members receive lengthy and costly training, making retention of those who qualify a high priority. This report focuses on the effectiveness of monetary incentives for SOF commissioned officer retention and the development of a models to assess how such incentives affect retention. 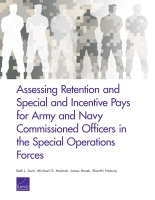