This report assesses the effects of the Blended Retirement System (BRS) on military retention and cost. The report finds that the BRS can produce the same retention as the legacy system if continuation pay (CP) is set at optimized levels. CP levels affect the likelihood that currently serving members elect the BRS, thereby affecting the time pattern of cost and cost savings to the government. 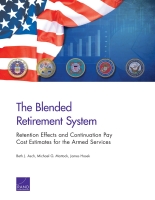 For decades, the services had a defined-benefit system that vested after 20 years of service in an immediate annuity computed based on years of service and basic pay using a 2.5-percent multiplier. The 2016 National Defense Authorization Act created a new system called the Blended Retirement System (BRS) that changes the defined-benefit multiplier to 2.0 percent and adds two new components: a defined-contribution plan known as the Thrift Savings Plan and continuation pay (CP).

This research uses RAND's Dynamic Retention Model to simulate the steady-state effects of the BRS on active component retention, reserve component participation, and CP costs for both officers and enlisted personnel for each of the armed services.

The research described in this report was conducted by the Forces and Resources Policy Center within the RAND National Defense Research Institute and the RAND Homeland Security and Defense Center.