This report looks at demographic differences in U.S. Air Force Undergraduate Pilot Training completion. It presents potential challenges that women and racial and ethnic minorities might face in entering and completing the training, as well as demographic differences in attrition rates, reasons for attrition, and an analysis of whether certain individual characteristics account for differential rates of attrition. 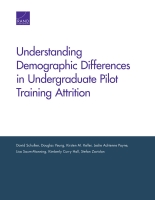 U.S. Air Force policymakers aim to recruit and maintain a force that reflects the demographic diversity of the nation it serves. Prior research has noted that the Air Force officer population tends to underrepresent female and nonwhite personnel and that this gap grows as rank increases. One factor that contributes to this relationship between demographics and rank is an officer's occupation: Officers in rated (i.e., flying) occupations tend to have more opportunities at the senior levels of the Air Force, and data show that women and racial and ethnic minorities are not well represented in rated occupations. The goal of this study was to better understand the barriers to becoming pilots that are unique to minority and female candidates.

This report examines one aspect of the pipeline for becoming a rated officer by looking at demographic differences in Undergraduate Pilot Training (UPT) completion. The report presents findings from a series of focus groups conducted with current UPT students and instructors to better understand potential challenges that women and racial and ethnic minorities might face in entering and completing UPT. The report also documents findings from a quantitative examination of demographic differences in attrition rates, reasons for attrition, and an analysis of whether certain individual characteristics (e.g., test scores, prior flying experience) account for differential rates of attrition. Finally, the report concludes with initial recommendations for improving current Air Force policies and practices to try to improve female and racial and ethnic minority representation in pilot career fields.