This report presents the results of a process and outcome evaluation of the California Energy Commission's Alternative and Renewable Fuel and Vehicle Technology Program (ARFVTP), relying on quantitative and qualitative methods. For the outcomes so far, we conclude that the ARFVTP has made considerable progress reducing many barriers to the market viability of alternative fuels and vehicles. 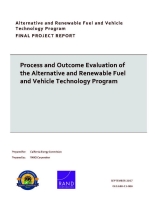 This report presents the results of a process and outcome evaluation of the California Energy Commission's (CEC's) Alternative and Renewable Fuel and Vehicle Technology Program (ARFVTP), relying on quantitative and qualitative methods. We find that the process for developing the ARFVTP's investment plan has been reasonable; CEC has targeted the major barriers to market viability across the main fuel-sector types funded by the ARFVTP (hydrogen, electricity, diesel substitutes, gasoline substitutes, and natural gas and biomethane); the ARFVTP has been successful in soliciting proposals; the criteria and weights that the CEC used to evaluate award applications are appropriate, but there are some concerns about the amount of time required to review applications and execute agreements; there are both strengths and weaknesses in how CEC oversees grants once they begin; completing projects on time has been a challenge for many awardees; and awardees are largely achieving their projects' most-central technical objectives. The ARFVTP has made considerable progress reducing many barriers to the market viability of alternative fuels and vehicles. The ARFVTP appears to have allowed awardees to proceed with projects they would not have undertaken otherwise. The program also supported some employment in California and did result in some hiring for the projects. Stakeholder suggestions (from successful, unsuccessful, and potential applicants) on ARFVTP investment priorities going forward vary by fuel type but generally call for continued program support.

Findings from the Process Evaluation

Findings from the Outcome Evaluation

This research was conducted by the Science, Technology, and Policy Program of RAND Justice, Infrastructure, and Environment and prepared for the California Energy Commission.