This report explores the missions and organization of China's military space enterprise, focusing on the People's Liberation Army (PLA) Strategic Support Force (SSF), created in 2015 to develop and employ most of the PLA's space capabilities. Its main function appears to be launch and operation of satellites to provide C4ISR capabilities critical to strategic deterrence, fighting informatized wars, and countering U.S. military intervention. 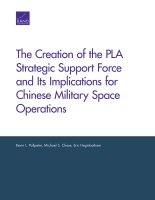 This report explores the missions and organization of China's military space enterprise, focusing on the organizational structure of the People's Liberation Army (PLA) Strategic Support Force (SSF). Created on December 31, 2015, as part of a major reorganization of China's military, the SSF is charged with developing and employing most of the PLA's space capabilities. Its creation signifies a shift in the PLA's prioritization of space and an increased role for PLA space capabilities. Chinese military strategists see military space capabilities and operations as a key component of strategic deterrence, critical to enabling the PLA to fight informatized local wars and counter U.S. military intervention in the region and essential for supporting operations aimed at protecting China's emerging interests in more-distant parts of the world. The main function of the SSF's space component appears to be the launch and operation of satellites to provide the PLA with command and control, communications, computers, intelligence, surveillance, and reconnaissance capabilities. It appears that information warfare, including space warfare, long identified by PLA analysts as a critical element of future military operations, has entered a new phase of development in which an emphasis on space and information warfare, long-range precision strikes, and the requirements associated with conducting operations at greater distances from China has necessitated the establishment of a new and different type of organization.