Controversy has surrounded China's East China Sea (ECS) Air Defense Identification Zone (ADIZ) since its establishment in 2013. This report explores questions about the ECS ADIZ and evaluates the prospects for a possible South China Sea ADIZ. While Beijing's recent statements imply that it is keeping its options open, China's leaders have used other tools in the SCS that are arguably more effective in achieving their objectives. 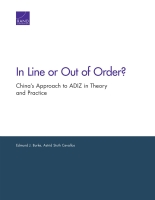 In Line or Out of Order?

China's Approach to ADIZ in Theory and Practice

Controversy has surrounded China's Air Defense Identification Zone (ADIZ) in the East China Sea (ECS). Questions about the zone's legitimacy, legality, ambiguity, implementation, and purpose have generated significant debate. U.S. observers appear particularly concerned about the implications for a potential ADIZ in the South China Sea (SCS). This report builds on existing reports and Chinese-language open sources to explore questions about the ECS ADIZ and evaluate the prospects for a possible SCS ADIZ. We assess the different situation and context facing Beijing in the SCS and argue that the calculus there does not necessarily suggest that the Chinese government will declare an SCS ADIZ. While Beijing's recent statements imply that it is keeping its options open, China's leaders are dealing from a stronger political and military position in the SCS because of their well-documented reclamation and construction of military facilities there. They have already used other tools, including deploying combat aircraft and air defense missiles, in the SCS that are arguably more effective in achieving their objectives.