The report assesses notable developments in and implications of China's emerging power-projection capabilities, focusing particularly on the People's Liberation Army Air Force's operations over water. The Chinese air force began developing a maritime mission in recent years, as well as capabilities and training toward this goal, and this has implications for the United States and its allies and partners in the region. 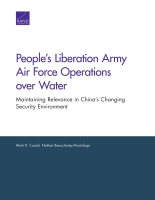 As China's economic, diplomatic, and security interests continue to expand, the People's Liberation Army (PLA) and in particular its aerospace forces — to include air force, naval aviation, and space capabilities — will require more robust power-projection and expeditionary capabilities on par with China's increasingly global footprint. Beginning in 2014, Chinese President and Commander-in-Chief Xi Jinping has led calls for the PLA Air Force (PLAAF) to support PLA efforts to defend China's maritime interests and strengthen its over-water capabilities toward this goal. The PLAAF's current modernization initiatives supporting this move include developing long-distance maritime power projection, improving strategic conventional deterrence, and building maritime strike capabilities. Recent PLAAF over-water exercises attempted to tackle these new and challenging problems as demonstrated by four groundbreaking flights into the Pacific Ocean through the First Island Chain in 2015 and flights into the South China Sea and around Taiwan in 2016. By the authors' count, from March 2015 through December 2016, the PLAAF conducted eight flights past the First Island Chain, including three patrols of the East China Sea Air Defense Identification Zone (ADIZ), two flights around Taiwan, and five flights into the South China Sea. These operations mark a training progression toward increasingly frequent and complex flights and suggest that the PLAAF is transitioning from the experimental phase to regularizing these long-range power-projection activities. In the future, Chinese leaders will likely expect the PLAAF to provide more strategic capacity — enforcing territorial claims, supporting strategic conventional deterrence, and, in the case of war, performing maritime strikes in the region.