This is one of four reports based on RAND Project AIR FORCE Strategy and Doctrine Program research that assesses notable developments and implications of China's emerging aerospace expeditionary and power-projection capabilities, which will have important implications for the reach of China's military and its ability to protect China's emerging overseas interests. 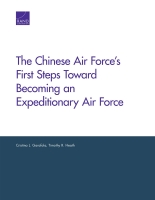 This report is based on RAND Project AIR FORCE Strategy and Doctrine Program research that was presented at the second China Aerospace Studies Institute conference, sponsored by Headquarters, U.S. Air Force. It took place on May 2, 2016, at the RAND Corporation's Washington office in Arlington, Va. Experts on airpower, military operations, and Chinese military modernization participated in the conference and provided valuable feedback to the report's authors. The four resulting reports assess notable developments and implications of China's emerging aerospace expeditionary and power-projection capabilities. As China's economic, diplomatic, and security interests continue to expand, the People's Liberation Army (PLA) and, in particular, its aerospace forces (including its air force, naval aviation, and space capabilities) will require more robust power projection and expeditionary capabilities on par with China's expanding global footprint. In addition to traditional security concerns (e.g., Taiwan and maritime territorial disputes), such issues as countering terrorism, humanitarian assistance/disaster relief, and sea-lane protection have now become factors in the PLA's training, doctrine, and modernization efforts. Command of space — including the military use of outer space — is also of increasing interest to the PLA as it seeks to develop new capabilities and operating concepts to support its growing range of military missions. This report focuses on the PLA Air Force's initial steps toward becoming an expeditionary air force, a development that will have important implications for the reach of China's military and its ability to protect China's emerging overseas interests.