Men and women might respond differently to some treatments for alcohol use disorder. If so, this would be important to consider when selecting treatment. The purpose of this systematic review was to synthesize evidence for gender differences in effects of treatments. While researchers did not identify systematic differences across studies, a paucity of reporting on treatment effects according to gender hindered analysis. 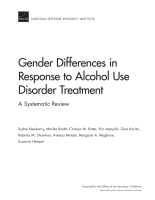 Gender Differences in Response to Alcohol Use Disorder Treatment

Given the documented gender differences in characteristics of alcohol use disorder, men and women might also respond differently to some treatments for this disorder. If so, this would be important for physicians to consider when selecting treatment. The purpose of this systematic review was to synthesize the evidence for gender differences in effects of treatments for the disorder. RAND researchers culled 13,771 citations, contacted authors, and reviewed 1,434 publications as full text. Of the 1,434 publications reviewed, only 24 original studies published in 63 publications and four systematic reviews met inclusion criteria. Studies reported efficacy or safety results for men and women separately or presented analyses of gender differences. The review used innovative analytic methods to assess gender differences in treatment effects by analyzing the differences in outcome between active and control treatments in studies with US adults undergoing evidence-based treatments. Although individual studies demonstrated gender differences in treatment effects, researchers did not identify systematic differences across studies. Most notably, despite an extensive search and thorough screening procedure, very few studies were found to report on treatment effects according to gender, hindering all analyses. The review showed a profound lack of information on the presence and absence of gender differences. Those studies that met inclusion criteria tended to be smaller and/or did not enroll comparable numbers of men and women; tended to assess a wide variety of outcomes, making cross-study comparisons difficult; and tended to have relatively high risk of bias.

Gender differences are an understudied area in alcohol use disorder

This research was sponsored by the Defense Centers of Excellence for Psychological Health and Traumatic Brain Injury, now part of the Psychological Health Center of Excellence, and conducted within the Forces and Resources Policy Center of the RAND National Defense Research Institute, a federally funded research and development center sponsored by the Office of the Secretary of Defense, the Joint Staff, the Unified Combatant Commands, the Navy, the Marine Corps, the defense agencies, and the defense Intelligence Community.