China's ascent as the world's second-largest economy has brought the country tremendous prosperity, but integration into the global economy has also exposed many of its citizens and assets to potential harm. This report examines how China can provide security for its growing array of overseas economic and strategic interests. It also seeks to understand how China's approach might provide opportunities or raise concerns for the United States. 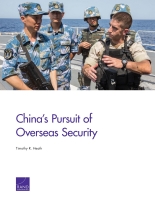 China's ascent as the world's second-largest economy has brought the country tremendous prosperity, but integration into the global economy has also exposed growing numbers of its citizens and their assets to potential harm. This report examines China's pursuit of security for its overseas interests. It surveys Chinese writings and Western reporting to describe the country's likely approach to protecting its economic and strategic interests abroad. The report concludes that China is likely to pursue a distinctive approach that features a far more limited military role than has been the case for the United States or imperial powers of previous centuries. Instead, China will likely rely on a blend of military, paramilitary, civilian contractors, and host-nation forces to carry out a more limited range of nonwar missions and tasks to safeguard international interests. This approach carries both opportunities and concerns for U.S. interests abroad. The PLA could prove a helpful partner to the United States in a variety of nonwar missions, such as humanitarian aid/disaster relief and counterpiracy operations. However, Chinese use of paramilitary forces and provision of arms to host-nation–provided forces could complicate the interests of the United States and its allies in some regions.