Analysis of Russian military capabilities reveals stark limitations in Russia's ability to safely and effectively deploy and sustain ground forces around the world. Notional deployment scenarios highlight a lack of readily deployable forces and transportation assets and limited freedom of movement. Collectively, these challenges suggest a modern Russian force that is far less deployable than the Soviet military it replaced. 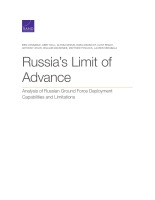 By the time it invaded Crimea in 2014, Russia seemed to have regained a significant portion of the military power it lost after the fall of the Soviet Union, reemerging as a perceived threat to democracy. But how capable is Russia of deploying and sustaining ground combat forces farther from its borders?

An analysis of notional ground deployment scenarios constructed from real-world, open-source data, along with a review of historical cases spanning the Soviet and post-Soviet eras, reveals strengths and limitations of Russia's military infrastructure. In fact, despite Russia's status as a reemerging global military power, its ground force deployment capability is strong only near its western border and within range of its air defenses. Although it poses a credible threat to Eastern Europe, its ability to deploy ground combat units drops off sharply as geographic distance increases. Limited forces and transportation assets, a lack of international support, and an insufficient ability to sustain its deployed forces also prevent Russia from regaining its Soviet-era deployment capacity.

This research was aided by a detailed order of battle for Russian ground forces and a specially designed calculator, which help advance understanding of the factors that stress Russia's ability to deploy forces and project power locally and globally. A companion report, Russia's Limit of Advance: Scenarios, presents more detail on the context and characteristics of the notional scenarios that underpin this research.

This research was sponsored by the Office of the Deputy Chief of Staff, G-3/5/7, U.S. Army and conducted by the Strategy, Doctrine, and Resources Program within RAND Arroyo Center.