Russia's ability to deploy military forces around the world is significantly depleted from the Soviet era. This report describes the strengths and weaknesses of Russia's ground force deployment capacity. Russia's armed forces are much improved from the 1990s, but lack of adequate transportation, political limitations, shortfalls in sustainment, limits on conscript deployment, and other factors constrain its global ground force deployment. 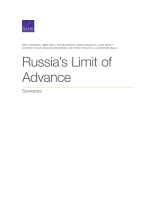 By the time it invaded Crimea in 2014, Russia seemed to have regained a significant portion of the military power it lost after the fall of the Soviet Union, reemerging as a perceived threat to democracy. But how capable is Russia of deploying and sustaining ground combat forces farther from its borders?

An analysis of notional ground deployment scenarios constructed from real-world, open-source data, along with a review of historical cases spanning the Soviet and post-Soviet eras, reveals strengths and limitations of Russia's military infrastructure. In fact, despite Russia's status as a reemerging global military power, its ground force deployment capability is strong only near its western border and within range of its air defenses. Although it poses a credible threat to Eastern Europe, its ability to deploy ground combat units drops off sharply as geographic distance increases. Limited forces and transportation assets, a lack of international support, and an insufficient ability to sustain its deployed forces also prevent Russia from regaining its Soviet-era deployment capacity.

This report presents additional detail on the notional scenarios that informed the analysis of Russian ground force deployment capabilities. The scenarios range from border deployments to long-range overseas deployments and were designed to test the limits of Russia's capacity to deploy forces and equipment. They were not necessarily chosen to reflect the probability or political feasibility of an actual Russian deployment.

This research was sponsored by the Office of the Deputy Chief of Staff, G-3/5/7, U.S. Army and conducted by the Strategy, Doctrine, and Resources Program within RAND Arroyo Center.