In 2017, the Office of Management and Budget called for federal agencies to develop actionable plans to maximize employee performance, including rewards for high performers and penalties for poor performers. In this report, authors identify ways to address poor Department of Defense employee performance by developing, supporting, and professionalizing supervisors in conjunction with assessing and reporting key performance-related outcomes. 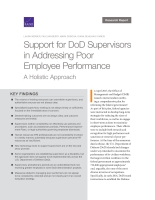 In 2017, the Office of Management and Budget (OMB) issued a memorandum that instructed federal agencies to develop actionable, measurable plans to maximize employee performance, including rewards for high performers and penalties for poor performers. At the time of the memorandum's release, the U.S. Department of Defense (DoD) already had changes under way intended to maximize the performance of its civilian workforce, the largest civilian workforce in the federal government at approximately 732,000 appropriated employees and also one of the most diverse in terms of occupations.

Recent evidence — specifically, the facts that 25 percent of DoD supervisors reported directly supervising at least one poor performer and that roughly 60 percent of these supervisors agreed that a poor performer would negatively affect the ability of other subordinates to do their own jobs — coupled with OMB's 2017 memorandum, motivated this study. In this report, the authors use interviews with human resources practitioners, survey responses from DoD supervisors, and past research to (1) identify promising policies, procedures, and structures for maximizing employee performance, with emphasis on assisting supervisors of poor-performing personnel, and (2) develop recommendations on how best to support supervisors responsible for managing the poor-performing DoD employees. The framework they present calls for developing, supporting, and professionalizing supervisors in conjunction with assessing and reporting key performance-related outcomes.

This research was sponsored by the Office of the Deputy Assistant Secretary of Defense for Civilian Personnel Policy and conducted within the Forces and Resources Policy Center of the RAND National Defense Research Institute, a federally funded research and development center sponsored by the Office of the Secretary of Defense, the Joint Staff, the Unified Combatant Commands, the Navy, the Marine Corps, the defense agencies, and the defense Intelligence Community.