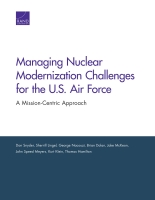 After decades of near neglect, the Air Force is embarking on a vast modernization of its portion of the nation's nuclear deterrence capabilities — but these modernization activities face a range of challenges. Nuclear-specific tasks related to testing and certification have not been performed at scale for many decades and will need to be relearned and revised for the current conditions. The sheer scale of the programs is daunting. And this ambitious set of programs will be fielded by Air Force Global Strike Command (AFGSC), a relatively young command with a relatively small staff that has limited experience in fielding new systems.

This report identifies and describes means to allay these challenges. The authors focus on the integrated planning and preparation for mission success across individual programs, with a special emphasis on the challenges of operational testing and nuclear certification.

What needs to be done

The research described in this report was sponsored by the Director, Strategic Plans, Programs, and Requirements, Air Force Global Strike Command and conducted by the Force Modernization and Employment Program within RAND Project AIR FORCE.