Because U.S. Coast Guard (USCG) rotary-wing aircraft are nearing their ends of life, the USCG is reassessing its airpower needs for its current missions and future operational requirements. Researchers assessed what airpower mixes could help the USCG execute its missions across the entire geographic domain for operations in the next 30 years. In this report, they document their findings and make recommendations. 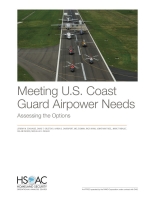 The U.S. Coast Guard (USCG) uses a fleet of fixed-wing (FW) and rotary-wing (RW) aircraft to conduct a variety of missions. That fleet's composition is now aging, with the RW aircraft nearing their ends of life. As the air fleet ages and needs to be replaced, the USCG can reassess its airpower needs for its current missions and its possible future operational requirements. Researchers examined USCG airpower⁠—specifically, what mixes of airpower can help the USCG execute its variety of missions across the entire geographic domain for operations in the next 30 years.

To address this question, the authors developed a scenario based on current demand for USCG missions, then a set of alternative demand scenarios. They also developed alternative air fleet options—a mix of FW and RW aircraft, as well as unmanned aircraft systems (UASs)—to model these aircraft's cost-informed effectiveness in meeting the demand in each scenario. The authors then modeled how each fleet option performed in each of the scenarios. The Cost-Informed Analysis of Fleet Effectiveness model incorporated USCG cost and performance data to measure performance and relative cost with a given fleet–demand scenario combination. This report should be of interest to the USCG as it considers recapitalization options for its current fleet of FW and RW aircraft. The work presented here could serve as the foundation for an analysis of alternatives and to make judgments about the validity of different recapitalization options, including the need for an expanded fleet of USCG UASs.

The USCG captures only actual activity

The medium-range UAS (MUAS) appears to be effective

This research was sponsored by the USCG Deputy Commandant for Operations and conducted within the Strategy, Policy and Operations Program of the Homeland Security Operational Analysis Center (HSOAC).