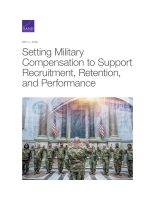 Military compensation has the dual role of recompensing members for their service and assisting the services in meeting their readiness objectives, including attracting and retaining personnel; motivating effort; inducing members to sort to the ranks, positions, and jobs for which they are best suited; and eventually separating personnel at the end of their career. Drawing on a large body of research, this RAND Arroyo Center report, part of a series on a common theme, describes the role of military compensation as a strategic human resource tool. The author also reviews how well compensation works in this capacity and how it could be improved. Specifically, the report examines issues related to the level and growth of military pay, the structure of the basic pay table, the role of special and incentive pays, and the structure of the military retirement system, especially the new Blended Retirement System. Key recommendations include reevaluating the pay-adjustment mechanism; considering increasing performance incentives embedded in the pay table; improving the setting of special and incentive pays to increase pay flexibility, efficiency, and performance incentives; ensuring that the continuation pay under the Blended Retirement System is set appropriately for officers; increasing the efficiency of the retirement system by reforming the accrual charge system; and recognizing that changes to legislation to improve officer management flexibility should also consider whether and how military compensation should change.

The research described in this report was sponsored by the United States Army and conducted by the Personnel, Training, and Health Program within the RAND Arroyo Center.