This report provides a summary of the risks, proliferation, and costs of man-portable air defense system (MANPADS) attacks against commercial aviation targets, as well as mitigation options. The research is focused on the historical use of MANPADS against civilian aviation; the threat of MANPADS proliferation and nonstate groups' MANPADS use; the potential economic impacts of an overseas attack on civilian aircraft; and mitigation options. 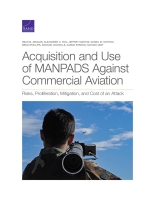 Acquisition and Use of MANPADS Against Commercial Aviation

Risks, Proliferation, Mitigation, and Cost of an Attack

Since 1975, upwards of 60 civilian aircraft have been hit by surface-to-air missile platforms known as man-portable air defense systems (MANPADS), resulting in the deaths of over 1,000 civilians. Terrorist groups like al-Qaeda, the Islamic State in Iraq and Syria, and Lebanese Hezbollah are thought to possess MANPADS, presenting an ongoing concern for civilian air travel in the modern political climate. Although a MANPADS attack on a civilian aircraft has not been attempted since 2007, the threat of MANPADS attacks remains, and so does the need to develop a better understanding of the security risks posed by these systems. The loss of life from a MANPADS incident could be severe and have grave international repercussions. The research summarized in this report aims to provide analysis of the key issues of this international security challenge.

This research was sponsored by the U.S. Department of State and conducted within the International Security and Defense Policy Center of the RAND National Security Research Division (NSRD).