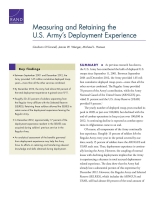 The U.S. Army has contributed the bulk of deployed U.S. troops since September 11, 2001 and has accrued substantial levels of deployment-related experience. Between September 2001 and December 2012, the Army provided 1.65 million cumulative deployed troop-years; the Regular Army provided 70 percent of the Army's contribution, while the Army National Guard of the United States (ARNGUS) provided 21 percent and the U.S. Army Reserve (USAR) provided 9 percent. However, as combat operations in Afghanistan conclude, soldiers separate from service, and Regular Army endstrength is reduced, the rate at which deployment experience is accumulated will decline, most likely resulting in a net decrease. The ARNGUS and USAR provide an additional option to retain deployment experience acquired in the Regular Army; however, the percentage of soldiers who transition to these components is on the decline. An analytical assessment of the benefits garnered from deployment experience may help the Army focus its efforts on retaining and transferring relevant knowledge and skills during deployment.

Deployment-Related Experience in the Army Is Declining