A review of the scientific evidence on suicide postvention (organizational responses to prevent additional suicides and help loss survivors cope), guidance for other types of organizations, and the perspectives of the family and friends of service members who have died by suicide provide insights that may help the U.S. Department of Defense formulate its own policies and programs in a practical and efficient way. 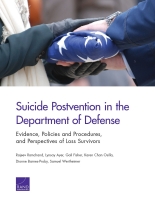 Suicide Postvention in the Department of Defense

Evidence, Policies and Procedures, and Perspectives of Loss Survivors

The U.S. Department of Defense (DoD) has been struggling with increasing rates of suicide among military personnel for the past decade. As DoD continues to implement new programs and examine its policies in an effort to prevent military personnel from taking their own lives, it is important to assess its current responses to suicide and to identify opportunities to enhance these programs and policies. Unfortunately, there is little scientific evidence on how best to respond to suicides, how to ensure that surveillance activities are managed appropriately and that loss survivors are given sufficient support to grieve, how additional suicides can be prevented, and how to honor and respect the decedent and his or her loved ones. At the same time, there are many resource guides intended to provide recommendations for organizations (mostly schools) in responding to suicides. A review of the existing scientific evidence on postvention (responses to prevent additional suicides in the aftermath of a suicide) and guidance for other types of organizations provides potential insights for DoD, however. Complemented by the perspectives of those most intimately touched by military suicide — the family and friends of those who have died — these sources may help DoD formulate its guidance in a practical and sensitive way.

The U.S. Department of Defense Has an Excellent System to Report and Track Suicides, but It Could Benefit from Additional Guidance and Improvements

This research was sponsored by the Defense Centers of Excellence for Psychological Health and Traumatic Brain Injury and conducted within the Forces and Resources Policy Center of the RAND National Defense Research Institute, a federally funded research and development center sponsored by the Office of the Secretary of Defense, the Joint Staff, the Unified Combatant Commands, the Navy, the Marine Corps, the defense agencies, and the defense Intelligence Community.