Congress enacted the Terrorism Risk Insurance Act (TRIA) in response to the terrorism insurance industry contraction after the 9/11 attacks. With TRIA set to expire, this policy brief examines the federal spending implications of TRIA. The authors find that, in the absence of a terrorist attack, TRIA costs taxpayers relatively little, and in the event of an attack comparable to any experienced before, it is expected to save taxpayers money. 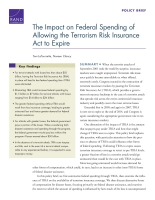 This policy brief examines the potential federal spending implications of allowing TRIA to expire. Combining information on federal spending through TRIA, the influence of TRIA on the availability of terrorism insurance coverage, and the relationship between uninsured losses and federal disaster assistance spending, the authors find that, in the absence of a terrorist attack, TRIA costs taxpayers relatively little, and in the event of a terrorist attack comparable to any experienced before, it is expected to save taxpayers money.

The research described in this report was conducted within the Center for Catastrophic Risk Management and Compensation. The center is part of RAND Justice, Infrastructure, and Environment, a division of the RAND Corporation.